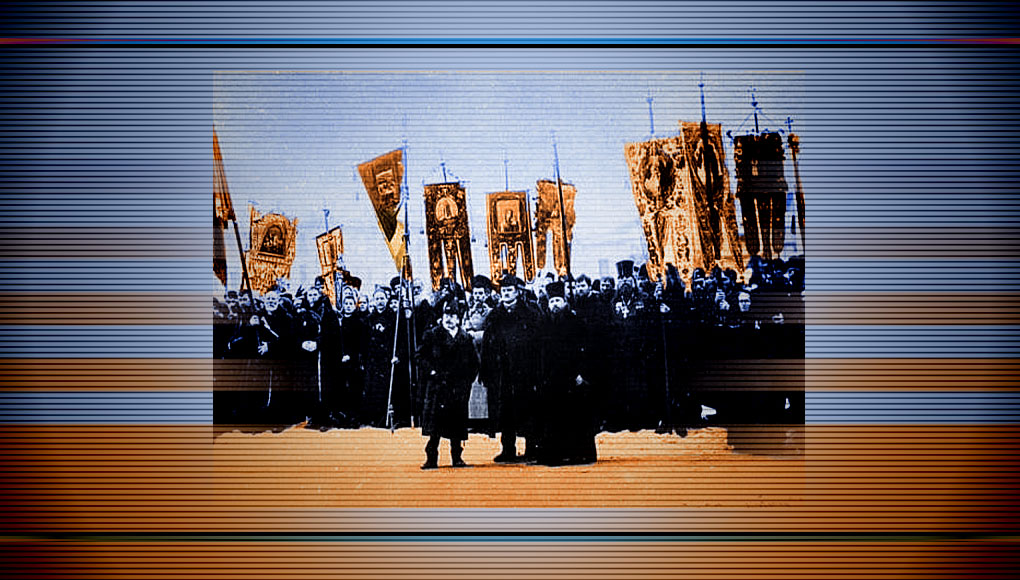 A brief review of the life of Vladimir M. Purishkevich. Fighting left-wing revolutionary cells was his profession; fighting liberals was his passion.

To understand the man, we must first turn to the city known then under its Russian name, Kishinev, now known as Chișinău, Moldova. A province of the Russian Empire in which the post-Catherinian Jewish ‘pale of settlement’ had been expanded in the 19th century, the region of Bessarabia was full of brewing ethnic tensions. Jews had established infamous crime syndicates known as Kahals, which did not endear them to either the Romanians or the Little Russians, as eastern Ukrainians were then known.

‘Purishkevich’, finds one biographical essay about him, ‘was the grandson of a Moldavian cemetery priest who worked his way up through the Church hierarchy to become a member of the Kishinev consistory and an hereditary noble. The priest’s son, Mitrofan, became a member of the Bessarabian provincial zemstvo and married a wealthy Polish aristocrat, securing for the Purishkevich family a large land inheritance. With a Polish‐Moldavian ancestry, therefore, Vladimir Purishkevich actually lacked any native Russian blood’.1

The Black Hundred was ostensibly formed to crush the revolutions of 1905–1907, but in reality to destroy the liberal reforms of Count Sergei Witte and the Kadets.

This suggests descent from one of the Polish-registered Cossacks of the 17th century, who embroiled the principality of Moldavia in what are (in Polish historiography) commonly termed the Moldavian Magnate wars; Bessarabia borders Ukraine, and does not share a Church or a border with Poland proper. Many Moldavians had Cossack (and therefore, in contemporary Imperial terms, Little Russian) ancestry stemming from the Moldavian Magnate Wars, traditionally identified in Moldavia as ‘Polish’ due to their registry in the Polish-Lithuanian Commonwealth’s army.2 Accordingly, Purishkevich took the Russian Orthodox argument on the Ukraine question quite seriously.

During his pre-WWI career, Purishkevich was a close associate of Pavel Krushevan. The latter was a fellow Russified Moldavian from Chișinău and a journalist who first edited and published The Protocols of the Elders of Zion. Unlike Purishkevich, whose anti-Semitism was non-violent, Krushevan has been blamed for instigating a 1903 pogrom.3

Whereas some of Purishkevich’s associates endorsed violence against the Russian Empire’s Jews, observes one hostile historian, ‘Purishkevich merely wanted to resettle them in the Kolyma region’.4 While well-read, Krushevan lacked Purishkevich’s formal education. (Purishkevich had earned a doctorate.) Despite their differences, these two men were close political allies with much in common.

Purishkevich and Krushevan both came from wealthy landowning families, but their insecurity about their non-Slavic blood led them to reject contemporary classism in favor of a populist variety of Russian nationalism. These landowners, who ‘belonged to Moldavian noble families in Bessarabia’, comments one historian, ‘not only embraced the values and traditions of their Russian counterparts but exaggerated their credentials as “true Russians”. While the old nobility generally contented itself with defending its social and economic interests, these fringe members seemed impelled to prove themselves as super-patriots.’5

In 1900, Purishkevich went to St. Petersburg and met the pediatrician Dr. Alexander Dubrovin. These two men, like Dostoevsky, argued that Russian monarchism was too reactionary, at least in terms of socio-economic questions. They also shared anti-Semitism, although Dr. Dubrovin’s was more extreme. In one summarization of their belief in the grim prospects of the autocracy: ‘The Jewish revolutionaries wanted to undermine and overthrow the existing order so as to facilitate the installation of the rule of the Jewish capitalists’.6

Purishkevich’s role in organizing the original Black Hundred (Union of the Russian People) movement is disputed. Evidently he was a more cunning and charismatic man than Dubrovin, and served as the latter’s propagandist. This movement was ostensibly formed to crush the revolutions of 1905–1907, but in reality to destroy the liberal reforms of Count Sergei Witte and the Kadets. Purishkevich published threatening editorials and left the violence to Dubrovin during the period of the original movement.

tired of Dubrovin’s autocratic ruling style and left the organization in December 1907. On 11 March 1908 he established a rival rightist group, the Russian National Union of the Archangel Michael (Russkii narodnyi soiuz imeni Mikhaila Arkhangela). The organization’s programme subscribed to the same position as the Union of the Russian People on all political and social issues except for Russian National Union’s explicit recognition of the Duma’s power to veto the Tsar’s legislative proposals. Nevertheless, exhibiting a kind of cognitive dissonance common to rightists who accepted the reformed Duma, the Russian National Union’s programme continued to describe the autocracy as ‘unlimited’. Out of ideological necessity, rightists insisted on maintaining the fiction that the new order was not ‘constitutional’ and did not restrict the tsar’s absolute power.7

By all accounts, Purishkevich was a spellbinding orator and a dangerous disrupter of the Duma. His theory of joining a parliamentary system just to undermine it was novel at the time, and would later be articulated by Dr. Joseph Goebbels. He had also disagreed with Dubrovin’s principled opposition to joining the Duma on the grounds that such stubbornness made it harder to recruit workers by pushing for a shorter workday.

During this time, Purishkevich appears to have usurped most of the Black Hundred movement from Dubrovin and attracted some of the working class. How did he do this? That is a bit of a mystery.

Purishkevich was a spellbinding orator and a dangerous disrupter of the Duma. His theory of joining a parliamentary system just to undermine it would later be articulated by Dr. Joseph Goebbels.

According to one source, Purishkevich ‘was referred to by his Soviet biographer as a “fascist” who had set an authentic style for a movement that would blossom forth in Europe a decade later’.8 He also organized ‘yellow shirts’, probably to fight the influence of Galicio-Ukrainian culture in Odessa.9 Dubrovin was based in Russia proper, while Purishkevich was based in the southwestern core of the Russian Empire, where the hated pale of settlement was located.

Accounts of Purishkevich’s recruitment of working class Ukrainians most likely explain the destination of the exaggerated amount of bribe money he took from a political rival, Prime Minister Pyotr Stolypin. Although the amount of money has been described as ‘millions’ by a highly unfavorable source10, a more rigorous one explains that ‘Purishkevich typically received a 15,000-rouble annual subsidy, which was regularly supplemented by additional funds for specific projects and publications. From the birth of the Russian National Union in 1907 through to 1912, Purishkevich received the enormous sum of 171,354 in state subsidies’. This money, however, did not stop him from criticizing Stolypin.11

Purishkevich was a critic of capitalism, despite his wealthy origins, arguing for a more worker-friendly autocracy. He blamed modern capitalism for spreading subversive ideas. The following description is otherwise more or less accurate:

Purishkevich’s fear of revolution was also at the core of his antisemitism. He eschewed the demagoguery of racialist rightists like Markov, who denounced Jews as a ‘criminal race’, and he rarely embraced Christian religious themes in his antisemitic arguments. As a noble and large landowner himself, he also shied away from the popular attacks on Jews as rich, greedy capitalists and, unlike Dubrovin, he did not call for the Jews’ expulsion from Russia or for their wholesale liquidation. Rather, Purishkevich’s hostility to the Jews stemmed from his belief that Jews, as a people, constituted the vanguard of the revolutionary movement. For him, with no loyalty to the Russian state or to the tsar, Jews stood at the forefront of every party, movement, or group that he believed was seeking to undermine the regime: the Kadets, socialists, the intelligentsia, the press and councils of university professors were all purportedly under the control of revolutionary Jews. For Purishkevich, the revolution and the Jews were inextricably bound together: to fight one necessitated a fight against the other.12

This source portrays him as driven by a reactionary fear of social change. Yet a closer look at Purishkevich’s relationship with the left reveals a more complex picture. Purishkevich’s own analysis has been summarized thus:

The main difference between the liberals and the radicals was that the liberals pursued their objectives more cleverly. They were more cautious, intelligent, and politically educated, V.M. Purishkevich observed, and they could subvert the political system through legal channels without anyone realizing what was occurring. Before the elections to the Second Duma, Purishkevich extravagantly declared that in those localities where there were no rightist candidates running for election, the voters might better cast their votes for leftist candidates than for liberals.13

‘Extravagant’ or not, this sentiment was sincere, as it would still be voiced by Purishkevich over a decade later, after the Bolsheviks had taken over Russia. Fighting left-wing revolutionary cells was Purishkevich’s profession; fighting liberals was his passion. For the original Black Hundred movement, crushing the former had been the easy part, achieved in tandem with other, more moderate rightist movements. Their real achievement was in stopping the Kadets and in destroying Count Witte’s career as Russia’s finance minister. Insofar as Purishkevich and his comrades bear some indirect responsibility for the doomed autocracy dying in violence by the far left rather than passing away gently into a liberalized oblivion, this achievement is perfectly consistent with his principles. He would not have it any other way.

2For information about the Cossacks in early modern Moldavia, see Amory Stern, Michael the Brave, the Ottoman Wars, and Count Dracula (San Diego, 2019).

3Steven Zipperstein’s Pogrom: Kishinev and the Tilt of History (2018) contains much information on Krushevan and the origin of The Protocols, but virtually none on Purishkevich.

V.M. Purishkevich, The Murder of Rasputin (Purishkevich’s posthumously published account – though whether it is an authentic diary or more of a memoir is disputed – of his role in the 1916 assassination of Rasputin).

Andrew Kalpaschnikoff, A Prisoner of Trotsky’s (An account by a man who had been imprisoned by the Bolsheviks with Purishkevich. The author recounts how Purishkevich’s resolve won a menacing Felix Dzerzhinsky’s respect).

Michael Kellogg, The Russian Roots of Nazism: White Émigrés and the Making of National Socialism 1917-1945 (Contains valuable information about Purishkevich’s activities after his 1918 release from prison until his death of typhus in 1920. During this mature period of Purishkevich’s career, he reverted to his pre-WWI Germanophilia, assisting a network of his protégés in getting The Protocols translated into German and helping former enemy General Ludendorff engineer the Kapp Putsch of 1920).