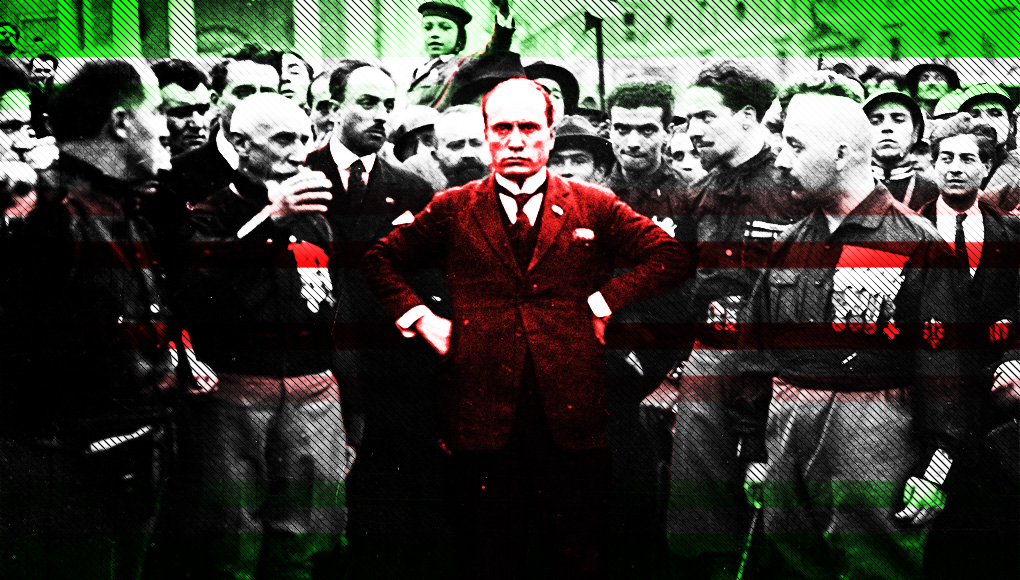 Mussolini and the Quadrumviri in the March on Rome
Benito Mussolini

Challenging reflections on the relation of force and consensus by the founder of Fascism.

TRANSLATOR’S NOTE AND COMMENTARY: The following article, a response to the early detractors of Fascism, was penned by Mussolini in May of 1923, several months after the March on Rome and Mussolini’s subsequent appointment to the Prime Ministry by the King, and several months before the Acerbo Law, which fully established the Fascist dictatorship. The article was originally published in the journal Gerarchia (Hierarchy), which Mussolini founded upon his rise to power in 1922, and which stopped printing only with Mussolini’s fall in 1943.

So far as the translator has been able to discern, this piece is not presently available in English translation, though portions of it can be found in various English books on Fascism. It is impossible to imagine it has never been translated in full, but the historical interest of the piece alone warrants its republication in a more available form.

Given the confusion presently surrounding Fascism – not least because of the inappropriate and flagrantly derogatory use the word suffers in our current discourses (viz. the ‘tawdry tricks’ which Mussolini mentions) – it is of interest to note Mussolini’s swift dismissal of ‘half-defunct socialism’. There is a tendency on the conservative right to conflate Italian Fascism and socialism, seeing them both as ‘left-wing’ phenomenon. This is historically untenable for many reasons, but Mussolini’s clear denial of any such unity is most informative.

Liberalism today is presented as the single legitimate form of government; Mussolini’s words demonstrate that this hubris is nothing new. It is characteristic of liberalism to consider itself the ‘end of history’ or, to use Mussolini’s description, the ‘final word, ... the definitive formula’. As Mussolini indicates here, the existence of Fascism is proof that other forms of government are possible. Soviet Communism eventually collapsed under its own weight, but Fascism was forcibly eradicated, which means that its feasibility as a form of rule was never disproven by ‘history’. This is surely part of the reason that fascism is today opposed with so much more ferocity than communism – and why the attacks on it inevitably shift from the practical or economic plane, to the moral.

We pose as an open question what Mussolini’s reference to the ‘triumphant beast’ toward the end might refer to. It cannot be written off as mere rhetorical flourish, for even if it is rhetorical, its power depends on its possessing a referent, if perhaps only a vague one, in the minds of Mussolini’s readers. This referent may have differed between the common readers and those informed about the affairs of the day.

Italian liberalism, thought to be the unique repository of authentic, immortal principles, is surely remarkably akin to our half-defunct socialism, since the former, just as the latter, believes that it ‘scientifically’ possesses an indisputable truth, good for all times, places and situations. This is absurd. Liberalism is not the final word, it does not represent the definitive formula in the art of governing. In this delicate and difficult art, which works the most refractory and mobile of materials, since it works on the living and not on the dead – in this art, there is no Aristotelian unity of time, place and action.1

Freedom is not an end; it is a means. As a means, it must be controlled and dominated.

Men have been more or less happily governed in a thousand different ways. Liberalism is the result and the method of the nineteenth century, which was not a stupid century, as Daudet opines,2 because there are no stupid centuries or intelligent centuries; intelligence and stupidity alternate with one another, in greater or lesser proportions, in every century. It is not obvious that liberalism, this method of government fit for the nineteenth century – for a century, that is, dominated by the two essential phenomena of the rise of capitalism and the affirmation of the sentiment of nationalism – should necessarily be fit to the twentieth, which already appears with characteristics quite different from those that defined the previous century. Facts are worth more than books; experience, more than doctrine. Now, the greatest experiences of the post-war period, those emerging3 beneath our very eyes, signify the defeat of liberalism. In Russia and in Italy, it has been demonstrated that it is possible to govern outside of, above and against the entire liberal ideology. Communism and Fascism both stand outside of liberalism.

But in what does this liberalism finally consist – this liberalism which today, more or less obliquely, inflames all the enemies of Fascism? Does liberalism mean universal suffrage and the like? Does it mean keeping the Parliament permanently open, that it might continue to offer that indecent spectacle which had so aroused the general nausea? Does it mean permitting, in the name of freedom, that the few have the freedom to kill the freedom of all? Does it mean opening the doors to those who declare their hostility to the State and who actively work to demolish it? Is this liberalism? Well, if this is liberalism, it is a theory and a practice of abjection and ruin. Freedom is not an end; it is a means. As a means, it must be controlled and dominated. Here enters the question of ‘force’.

The liberal gentlemen will please tell me if ever in history there has been a Government based exclusively on the consensus of the people, a Government which renounced every use of force. Such a Government has never been, and will never be. Consensus is as mutable as the formations of the sand on the banks of the sea. There cannot always be consensus. Consensus can never be total. No Government has ever existed which has contented all of those it governed. Whatever solution you happen to provide for this or that problem, you – even were you granted a divine wisdom! – will inevitably create a category of malcontents. If not even geometry has been able to do it, still less can politics square the circle.

Given as axiomatic that any and all Government provisions will create malcontents, how will you stop this disaffection from running rampant through the State and constituting a danger to the same? You will stop it with force. By accumulating the maximum degree of force. By employing this force inexorably, when such is necessary. Rob all force from a Government – and I mean physical force, armed force – and leave it with nothing but its immortal principles, and that government will be at the mercy of the first organized group determined to tear it down. When a group or a party is in power, it has the duty to fortify itself and defend itself against all.

Let it be known, therefore, once and for all, that Fascism knows no idols, it adores no fetishes.

The manifest truth, which by now stands before the eyes of everyone who has not blindfolded himself with dogmatism, is that men are perhaps even tired of their freedom. They have made an orgy of it. Freedom is today no longer the chaste and severe virgin for whom the generation of the first half of the last century fought and died. For those intrepid, restless and hard youths, rising in the morning twilight of this new history,4 there are other words that exercise a greater fascination, and they are: order, hierarchy, discipline. This impoverished Italian liberalism, which goes about everywhere groaning and struggling for greater freedom, is singularly tardy. It stands completely outside the realm of comprehension and possibility. There is talk of seeds on the brink of spring. Bosh! Some seeds die beneath the winter snowfall. Fascism, which was not afraid to call itself reactionary back when many of the current liberals were lying prone before the triumphant beast, is not ashamed today to declare itself illiberal and antiliberal. Fascism will not be the victim of tawdry tricks.

Let it be known, therefore, once and for all, that Fascism knows no idols, it adores no fetishes: it has already passed over – and, if such be necessary, will calmly pass over once again – the more or less mouldering body of Goddess Liberty.

1Reference to the so-called ‘classical unities’ or ‘Aristotelian unities’ – the unity between action, time, and place – which were held to establish the standards for tragic poetry or plays. In truth, there is little of Aristotle about them; the theory developed in the Renaissance. That aside, Mussolini’s point is that the political theoreticians of his time have been treating politics as a drama piece, applying a totally ‘abstract’ theory to the practice of political life. But politics are not the product of rationality, and Italy is not a set piece.

2Reference to Léon Daudet (1867–1942), author of the provocatively named Le Stupide XIXe Siècle (1922), translated into English in 1928 as The Stupid Nineteenth Century.

3Italian: quelle che sono in istato di movimento sotto i nostri occhi, lit. ‘those that are in a state of movement beneath our very eyes’. Istato di movimento is the same phrase that Mussolini used to describe the material upon which government works, hereabove rendered as ‘mobile’.

4The idea of a ‘new history’ was quite literal, and generally resonated with the Italians of that period. It should be recalled that in 1926, the Fascists introduced a new calendar, based on the Era Fascista, and beginning on 29 October, 1922, the date of Mussolini’s accession to the Prime Ministry. As is only fitting, the years of the new calendar were indicated with Roman numerals.