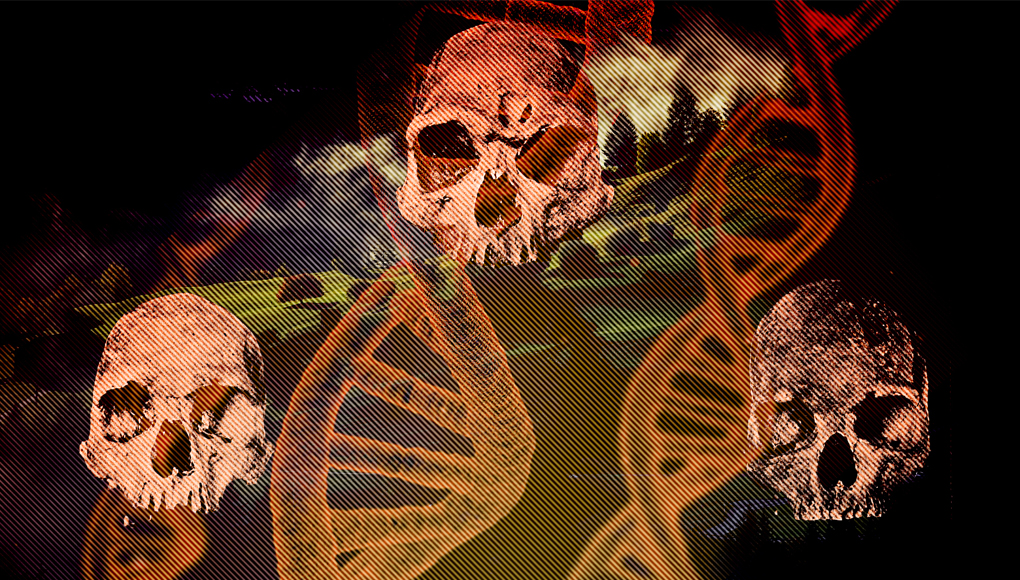 Kerry Bolton
Series: Epigenetics and the Idea of ‘Race’

The study of epigenetics, far from demonstrating the non-existence of race as liberal academics would like to believe it does, might in fact explain the mysteries of ethnicity itself.

Despite Baker’s admiration for Spengler’s intellect and erudition, he is ‘eliminated at once’, along with Nietzsche, ‘as irrelevant to the ethnic problem’, as he ‘makes it abundantly clear that the Volk was not an ethnic taxon.’1 Baker’s purpose in writing Race was to define and classify races or what he called ‘ethnic taxa’ in a biological way. Spengler would have rejected such categorizing as an expression of the English materialistic Zeitgeist of weighing and measuring all things. For Darwinian scientists such as Baker, Spengler’s definition of a ‘race’ was ‘remarkable’, to use Baker’s word, insofar as it seemed odd.

Liberals are obliged to recognize differences in ‘race’ because of the adverse medical impact in trying to ignore them.

How is it possible that there can be any inheritance of characteristics acquired from collective experiences (history) within a given landscape that go to form a ‘race’, as Spengler defined it? How is it that, as quoted by Baker, according to Spengler, ‘great events first produced the Volker’? Is this nothing more than the debunked theories of Lamarck and Lysenko, and a resort to the supposedly disproven study of Boas on skull measurements? How can any such concept as a Zeitgeist or a Volkgeist (suggesting ‘spirits’) be anything but the romanticism of the German Idealists such as Goethe and Herder? As we have seen, Goethe was one of two (the other being Nietzsche) to whom Spengler paid special tribute for their influence on his thinking. Interestingly, Nietzsche was a precursor of epigenetics, writing in 1886:

That which his ancestors most liked to do and most constantly did cannot be erased from a man’s soul. … It is quite impossible that a man should not have in his body the qualities and preferences of his parents and forefathers, whatever appearances may say to the contrary. This constitutes the problem of race. …2

To understand one another it is not sufficient to employ the same words; we have also to employ the same words to designate the same species of inner experiences, we must ultimately have our experience in common. That is why the members of one people understand one another better than do members of differing peoples even when they use the same language; or rather when human beings have lived together for a long time under similar conditions (of climate, soil, danger, needs, work) there arises from this a group who ‘understand one another’, a people. In every soul in this group an equivalent number of frequently recurring experiences has gained the upper hand over those which come more rarely: it is on the basis of these that people understand one another, quickly and ever more quickly … it is on the basis of this quick understanding that they unite together, closely and ever more closely.3

While there has been confusion in the popular press, which take it as a revival of Lysenko and Lamarck,4 epigenetics does not replace Mendelian inheritance. The concept was explained in a paper published in 1956 by Waddington on an example of the inheritance of an acquired characteristic.5 Dr. Chris Faulk writes: ‘Epigenetics means that the environment can impact your physical characteristics, your phenotype, and potentially even be passed on to your offspring’.6

Not all heritability is genetic, and humans, like all animals, have the ability to adapt to the environment. One of the main mechanisms for altering gene expression is through epigenetics, literally ‘above the genome’. Epigenetics has been in the news lately for its potential impacts on human health, and has even been touted as requiring a complete overhaul of the modern synthesis of evolutionary theory. The basic premise of epigenetics is that chemical marks (DNA methylation, histone modifications, and bound non-coding RNAs) can result in gene expression changes and can be passed down through cell division without changes in a cell’s DNA. If these changes are passed down through the generations, they are considered non-Mendelian, since they do not follow the law of genetic segregation. Practically, epigenetics means that the environment can impact your physical characteristics, your phenotype, and potentially even be passed on to your offspring.7

Liberal academics claim that epigenetics shows that race is a social construct that can be disposed of, yet they are profoundly uncomfortable with it. They contort to make epigenetics fit their ideologies. For example, while stating that ‘race is a social construct’ a team of biologists nonetheless also stated that ‘racial and ethnic categories also reflect the shared experiences’.8 ‘Shared experiences’ are history and culture, the very elements that Spengler stated form a ‘race’. Liberals are obliged to recognize differences in ‘race’ because of the adverse medical impact in trying to ignore them. Certain traits acquired from the environment including those to which pregnant women are subjected, generation after generation, are inherited as acquired characteristics. These become race characteristics for good or ill, physiologically, psychologically, morally, spiritually, and culturally. The Galanter study comments:

Scientists are obliged to face such realities:

The future of medicine, Dr. Burchard11 argued, carefully considers genetic ancestry, race, ethnicity and culture all at the same time. He published research back in 2011 showing how far the medical research establishment is from factoring in the nuances of race and ethnicity. That 2011 research showed that 94 percent of study participants in modern genetic studies are white, Dr. Buchard said. ‘We study whites a lot, and then we try to generalize that to Sri Lankans, blacks, Asians, and other racial groups. That’s not just socially unjust, it’s bad science and bad medicine.’12

What is of concern to liberal-activist academics is that the concept of genetically fixed races that has been consigned to near-oblivion among respectable academia, might be replaced by the concept of epigenetically formed races. This is environmentalism, but not of the type that accommodates Marxist or liberal ideologies. Becky Mansfield, Associate Professor of Geography at Ohio State University, sees epigenetics as an exciting new science that can be both ‘anti-racist’, but also used as a new theory of race-formation. She claims that ‘racism forms race’ epigenetically. That is to say, the liberals again try to reduce any conception of ‘race’ to being nothing other than a social construct contrived by a white patriarchal conspiracy as a means of exploiting some mysteriously invented population cluster that have arbitrarily been designated racially. However, the liberals are in a quandary. Mansfield for example is bothered by the predicament that focusing on dietary and hence medical problems among the Afro-American population perpetuates ‘race’ as a ‘social construct.’

What I will show is that, far from making race meaningless, epigenetic biopolitics marks a transformation and even intensification of racialization. To the extent that biology is mutable, then evidence that childbearing women of color fail to properly manage their individual and collective bodies doubly proves that race exists, and exists on the body. … Whereas race may have started as a fiction – a social construction – through epigenetic biopolitics it is made quite material, not just in phenomenological embodiment, but in the molecular-environmental development of individuals.13

Professor Mansfield is concerned that studies and warnings about poor diet among Afro-American mothers might result in perpetuating racial stereotypes, which epigenetically become real; yet the option is to ignore these problems to the detriment of public health. That is a predicament for those who deny that ‘race’ has any meaning other than as a socio-political method of exploitation.

Epigenetics might explain the hitherto mysterious mechanism by which a ‘race soul’ might be formed and inherited.

Additionally, and of even more relevance to the Spenglerian approach to race-formation, behavioural epigenetics studies the way experiences (and hence history) can be epigenetically passed on, becoming a collective acquired characteristic; that is, a race-trait, an archetype and a culture. This branch began when Moshe Szyf, molecular biologist and geneticist, and Michael Meaney, neurobiologist, both with McGill University, Montreal, hypothesized whether severe stressors could epigenetically cause neuron changes in the brain.14 Dan Hurley of Discover magazine writes of this:

According to the new insights of behavioral epigenetics, traumatic experiences in our past, or in our recent ancestors’ past, leave molecular scars adhering to our DNA. Jews whose great-grandparents were chased from their Russian shtetls; Chinese whose grandparents lived through the ravages of the Cultural Revolution; young immigrants from Africa whose parents survived massacres; adults of every ethnicity who grew up with alcoholic or abusive parents – all carry with them more than just memories.15

In regard to the epigenetic impact on the Jewish race memory, a recent genetic study of thirty-two Jewish men and women who had experienced trauma during World War II, and of their children, compared with Jewish families who had lived outside of Europe during the war, concluded that there is ‘an association of preconception parental trauma with epigenetic alterations that is evident in both exposed parent and offspring, providing potential insight into how severe psychophysiological trauma can have intergenerational effects’.16

The same principles of epigenetics are applicable to all races, or ethne, as responses to challenges and other shared experiences, whose impact is often reinforced by myths, legends, ritual and customs. Indeed that is the purpose of legends, myths and the religious forms they take. It is the meaning of history and the definition of ‘culture’. The steppes shaped the Russian psyche, the seas the English. Spengler explained race-formation by such concepts. Epigenetics might explain the hitherto mysterious mechanism by which a ‘race soul’ – or Jung’s collective unconscious if one prefers – might be formed and inherited.

9CpG sites: regions of DNA nucleotide sequences, changes of which result in epigenetics.

11Esteban Burchard of the University of California, San Francisco.

14Dan Hurley, ‘Grandma’s experiences leave a mark on your genes,’ Discover, May 2013.

Briggs A. (1985), The Nineteenth Century: The Contradictions of Progress, New York.

Condorcet, Marquis de. (1802), Sketch for a Historical Picture of the Progress of the Human Mind, Baltimore.

Demandt, A. (2017). Decline of the Occident, Studies on Oswald Spengler, Cologne / Weimar / Vienna.