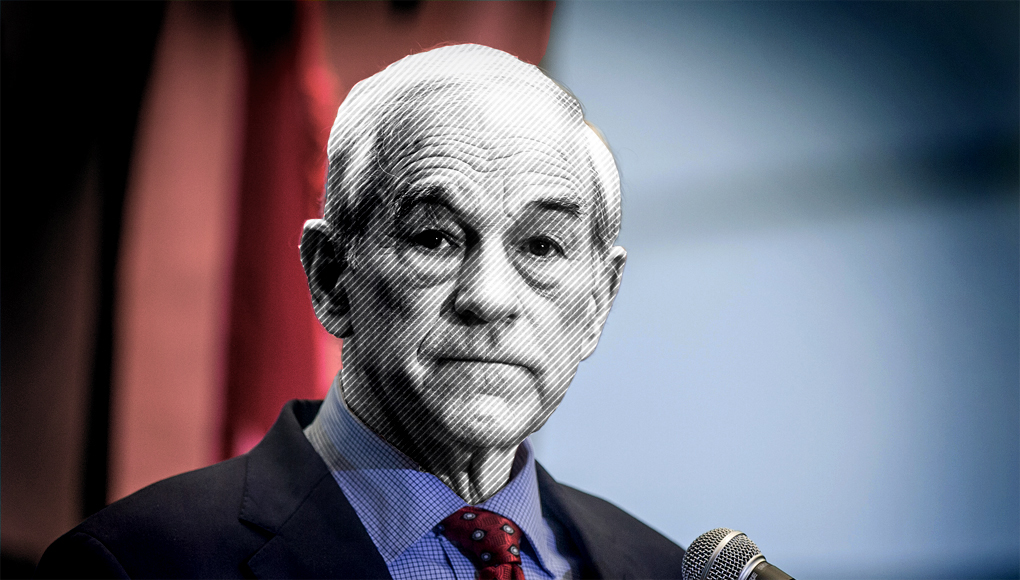 The Ron Paul Revolution – and its ultimate failure – revolves silently around the pivotal questions of our contemporary politics.

From 2008 to 2012, libertarianism came into its own. Always the nerdy kid whom nobody beat up, necessarily, but who could not achieve anything resembling popularity, suddenly, in post-9/11 America, libertarianism’s voice grew deep and authoritative, its frame filled out, and people began to notice that it had a lot of interesting things to say. The jock (neoconservatism) and the hippie (liberalism) started to seem tiresome and aggravating by comparison.

During this brief shining moment libertarianism was infinitely more radical than the American left, and infinitely more principled and disciplined than the American right. It had answers that both spoke to our instincts for ‘social justice’, and that made sense on a purely mechanical level. Multitudes of sharp young people took up the libertarian banner and the prevailing neocon/neoliberal political order found itself under perpetual siege – at least online – from countless, fanatical, freelance philosophers and economists.

The catalyst for all of this, of course, was the 2007/2008 presidential campaign of Congressman Ron Paul of Texas. Paul was like an old book picked up at a second-hand store and then never read, which is opened out of desperation one rainy day and winds up transforming your understanding of reality. The deceptively mild-mannered, then seventy-two-year-old had been around for decades, preaching his anti-war/pro-market gospel to an indifferent populace and political class. But, to an extent that astonished everyone, 9/11 and its bizarre aftermath had made a considerable contingent of Americans thirsty for what the congressman had on tap. All it took was for Paul to clearly state his stunningly rational positions in the prime-time, high-stakes setting of the Republican Party presidential debates and, all at once, the passions of an army of politically homeless activists were ignited.

Most of the groups that split from the Ron Paul movement are caught in a political twilight zone, forever pontificating about unattainable and ultimately illogical goals, unable or unwilling to ask the questions that finally, fully explain what makes society function.

Those activists were, generally speaking, people who detested the lowbrow, warmongering image that conservatism had acquired under George W. Bush, but who nonetheless wanted their guns and individual and marketplace freedoms. To these frustrated, energetic, mostly middle class, mostly young, mostly white, mostly males, Ron Paul became the living symbol of everything that could be right with America. The congressman was a one-stop shop for salvation, offering a seemingly flawless moral philosophy in libertarianism, a scientific validation of that philosophy in Austrian economics, and the chance to ram the whole thing down the throat of the vile establishment right now, via his presidential bid. It’s no wonder that, despite establishment efforts to suppress his presence and his message, Paul became a bona fide phenomenon whose popularity was sustained into the 2011/2012 election season, when he staged a sequel to his 2007/2008 extravaganza.

The end of libertarianism’s stint as the cool kid came with the demise of Paul’s presidential aspirations at the 2012 Republican National Convention. The Republican Party changed its rules mid-play to shut Paul out of the nomination process, Mitt Romney was predictably promoted and then went on to throw the election, and another term under Obama began.

With its struggle to impact actual policy at an end, the relatively large movement that libertarianism had become over the previous four years suddenly had nowhere to direct its energies, and it began to dissolve into squabbling and increasingly radical, and increasingly delusional, factions.

Ron Paul had left certain crucial pieces out of the libertarian puzzle. Paul himself is a profoundly conservative, enormously competent white male with a large family, a fine career outside of politics, and a phobia of debt in any form. What libertarianism – and in a far more complex and abstract form, Austrian economics – offers such a man is a way to strive to create a setting where he can prosper, while avoiding the thorny topic of demographics or, more basically, race. When one’s philosophy is nothing but a set of cold mathematical proofs, the question of to whom all of these moral, legal and economic calculations might pertain is easy to gloss over. Only a racist would ask which particular groups are likely to value rugged individualism and free enterprise. Those things are, Paul assured us, universal principles that can be taken up by all humans!

The fatal flaw in libertarianism became apparent between 2012 and 2015, when the movement Paul launched split into a liberal and a conservative camp, and then split, as I see it, into five subgroups which are, broadly:

The last group is probably the real legacy of the Ron Paul Revolution. The other groups (with the exception of the libertarians who are actually confronting human biodiversity) are caught in a political twilight zone, forever pontificating about unattainable and ultimately illogical goals, unable or unwilling to ask the questions that finally, fully explain what makes society function. Yes, social systems and principles are important, but who builds social systems and outlines principles? People. Humans are not robots that can simply download new moral schemes or codes of conduct; we are animals, many of which cannot understand or be made to care about anything more complex than where the next emotional or sensory thrill will come from.

It is reasonable to say that, while people from many subcultures joined the movement, and while it has attracted a wide variety of people since 2015, the alt-right is primarily an outgrowth of the liberty movement that grew up around Ron Paul’s presidential bids. Three of the four regular hosts of the seminal alt-right podcast, The Daily Shoah, as well as Richard Spencer, Christopher Cantwell and numerous other alt-right notables, started on their paths to the alt-right as guerrilla fighters in some facet of Ron Paul’s revolution.

What happened to all of these people was that they processed all of the libertarian – and probably most of the Austrian economics – theories and arguments, and could see that, if only these rock-solid principles and proven models could become the basis for personal and public policy, the world would become a utopia.

And then they discovered the Truth that trumps Truth.

The 2008 to 2012 libertarian moment demonstrated, once and for all, that the left stood for nothing but bumper-sticker humanitarianism, and the right stood for nothing whatsoever – not even enforcement of the most basic laws of the land.

Nobody agonizes over individualist ethics and the preconditions for marketplace magic, and nobody ever will, except a particular strain of nerdy white guy, and a number of Jews with questionable motives.

In fact, according to all relevant statistics, most other types of people are absolutely allergic to anything that in any way resembles systems and ideas that white guys have traditionally created and embraced.

So, a set of former ‘Paultards’ began asking different questions, delving into the issue of human group differences, and the alt-right was born.

At the same time, the four years of raucous libertarian activism had imprinted Paul’s message onto the mass culture, and helped pave the way for Trump’s populist uprising.

It cannot be denied that Ron Paul’s libertarian crusade was vitally important as a paradigm-breaker. By clearly outlining the ideals that most white people profess to hold dear, Ron Paul and his acolytes demonstrated, well beyond any reasonable doubt, that mainstream politics in America had become not just a fraud, but a barefaced mockery of what our system purports to be. Can anyone who watched it unfold forget John McCain, Mitt Romney, and the other Republican presidential hopefuls, assembled on the debate stage, laughing together at Paul as the congressmen attempted to argue in favor of the Constitution? Can anyone who watched it unfold forget Paul’s dead-on prediction that the ‘revolutionary’ candidate, Barack Obama, would continue operating on all the general assumptions of the Bush II regime?

In short, the 2008 to 2012 libertarian moment demonstrated, once and for all, that the left stood for nothing but bumper-sticker humanitarianism, and the right stood for nothing whatsoever – not even enforcement of the most basic laws of the land. Ron Paul’s movement served as a litmus test, a one-time chance for Democrats or Republicans, liberals or conservatives, to put up or shut up. The leadership of the left or the right could prove, at any point, that their parties and movements were legitimate, by accepting the libertarians’ simple challenges. The right could stand on principle with regard to rule of law; the left could stand on principle with regard to war and peace.

But the leadership of the left and the right failed – and not only failed, but gloried in betrayal, and cynically derailed any discussion of principles or ideals.

That is the lasting lesson of the Ron Paul Revolution.

Unfortunately however, beyond this litmus test, libertarianism has little of practical value to offer in the present political climate. Trump built, to some extent, on what Ron Paul began, and has now remade the Republican Party so it is, or at least sincerely strives to be, anti-war and pro-markets. Trump did this, interestingly, by repackaging Paulian/libertarian principles as unsophisticated, even belligerent, patriotism.

It is all one. Trump is selling precisely what Ron Paul was selling – namely, a return to traditional white ethics – but with a much cruder, and infinitely more effective pitch. And in fact, at a strictly logical level, Trump trumps Paul because he has introduced the factor that libertarians steadfastly avoid: the eternal question of who? Trump has said, in effect, ‘We can have back all of our righteous, irreproachable Western values, my friends, but there’s one catch: we can’t save the world.’

Alt-righters, broadly speaking, are just libertarians who realized that we – that is, white people – cannot save the world. We cannot rewire the brains of black or brown people, or even Northeast Asians, so that these groups will, as groups, enthusiastically embrace Lockean property rights. It will simply never happen. A multicultural utopia – of a libertarian or any other variety – is biologically impossible. That is what libertarianism, and even Austrian economics, actually teaches. ‘Mathematically’ proving the power and validity of what have, empirically, objectively, only ever been white values and systems, winds up being a racial argument. One only needs to spend five minutes examining the matter through that lens.

Although their moment has come and gone, it can still be said that libertarians are right. But they are right in the way that the designer of a perfect video game is right. The designer has proved the sublime symmetry and effortless flow of a particular system. Within the vacuum of that system, the designer is like a god, able to see and understand all. What the designer cannot explain, however, is the far more complex issue of how his system fits into the larger world. Who is likely to play his game? Who is capable – or incapable – of even understanding its rules? Who might obsessively seek out ways to cheat and disrupt, and ruin the game for everyone? Who is likely to misuse what he has created, and turn its benefits into curses? Who would be happier if he never came into contact with his ‘perfect’ system?

These are the questions that anyone who is interested in ultimate truth, and ultimate justice, must ask about any system.

A brief intellectual biography of the father of metapolitics.

On Authority in the Present Day

Modernity is the first historical epoch which has concerned itself more with crippling the powerful than with improving them. The results of this unhappy experiment are by now clarion.