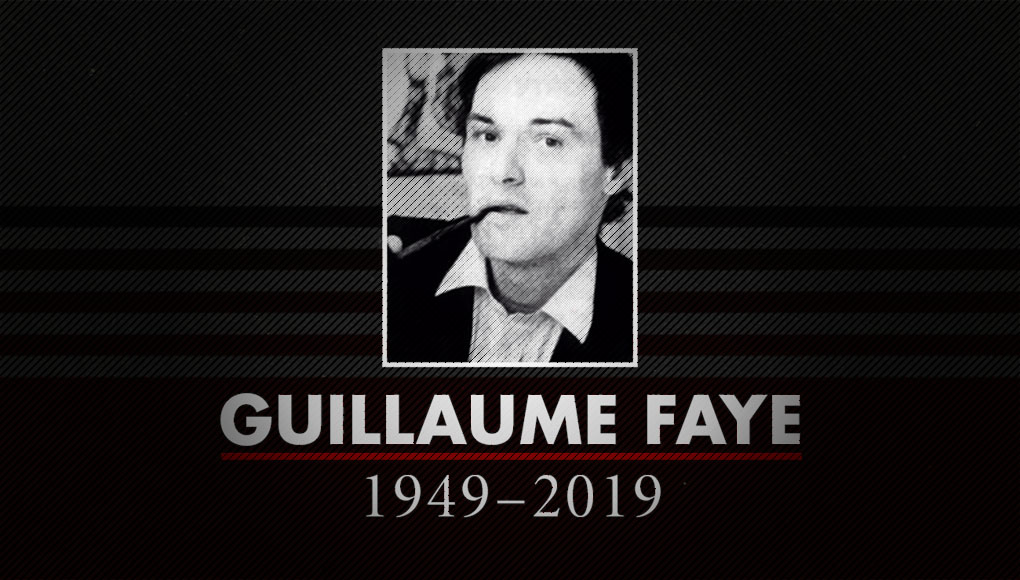 By now, it is unlikely that any reader of Arktos Journal has yet to learn of the demise yesterday, 7 March 2019, of Guillaume Faye, who succumbed after a long struggle to a far-advanced cancer.

A list of all the men influenced by Guillaume Faye’s ideas would surely compass nearly all the names of the foremost intellectual and activist leaders of the contemporary dissident Right; that is the measure of his reach, and of our loss. The news comes indeed as a heavy blow to all those who cleave to the dissident Right in our day; for desperately few are those thinkers capable of seeing simultaneously on the level of the global and the local, of the past, the present and the future, of principle and practice, and but few of these few possess the clairvoyance, the magnanimity and eloquence of a Guillaume Faye. It is as though we had all grown, at a blow, a little the more myopic, a little the blinder and blander, a little the duller and dumber – a little less bold and innovative in our vision of tomorrow, and a little less ready to confront whatever vicissitudes that same tomorrow might harbour.

Faye was a paragon of audacity, in the best tradition of that true master of audacity who was his foremost teacher; nor did he ever restrain himself even a hair’s breadth in his bravely forthright denunciation of the ills and errors he perceived pullulating around him.

It is fitting, upon the passing of a man, to celebrate the deeds and ideas of his life. I leave recollection of his deeds to those who knew him personally,  honour which I was sadly never afforded. But reflecting that in the life of any true intellectual, these two categories – deed and idea – overlap if they do not coincide, I do not believe it would be amiss if, in celebration of Faye’s life and in honour of his death, we paused to review a certain vital concept which runs as a golden thread throughout his work – one of the many idea-children he brought into this world, which are destined, as is only right, to long outlive their father. We choose our theme with care, as that which, it seems to us, is most liable to gain us access to the best spirit underlying Faye’s work – that fearless, tireless, unyielding warrior genius, which we might well hope will deign to dwell with us all for a long time coming, notwithstanding the fact that one of its favoured sons has departed us.

One of the prime characteristics of Faye’s work, which must strike the reader coming upon it for the first time, is its evident willingness to look in the face of a potential and multipolar global disaster, to analyze this possibility with a ruthless realism, to consider what future might arise out of it for good or for ill, and to do all of this without the least sign of perturbation, bland optimism or resignation.

Consider the cool candour and the almost philosophical detachment of the following remark:

History teaches us that humans do not change their civilization after deliberation, or by their own willpower, but in the wake of chaos that they themselves have provoked.1

One could easily imagine these as the words of some historian reflecting on the fall of a long-dead civilization in a remote corner of the globe, rather than the utterance of a wakeful man standing before the imminent collapse of his own. I have elsewhere noted the pivotal nature of catastrophe to Faye’s thinking, and have indicated some of the reasons for this.2 In his social analysis, Faye departs from a point of ruthless psychological realism, or a view which attempts to assess human beings, not as they could or should be, but as they are, here and now. Psychological realism in most times and places educates men to the moderation of hopes and to a conservative bridling of political optimism.3 If human beings by and large cannot be made to change, much less to improve, and if the attempt to force them do so through societal or political machinations generally leads to unforeseen, undesired and in some cases abhorrent consequences, then it is surely best to leave well enough alone, and to resist all efforts at altering the basic fundaments of society. Psychological realism trains a man to caution, moderation, and restraint.

Anyone who has read so much as a paragraph of Faye’s works will recognize the striking disparity between these adjectives and the qualities of the man whose life we are come to commemorate. Sooner than caution, Faye was a paragon of audacity, in the best tradition of that true master of audacity who was his foremost teacher; nor did he ever restrain himself even a hair’s breadth in his bravely forthright denunciation of the ills and errors he perceived pullulating around him. Faye’s insights into the limitations of the human heart and the human head, and especially the common man’s heart and head, were keen and sober; yet these very insights seemed to propel him to greater and more merciless honesty in his writing. Recognizing the impossibility of genuine revolution in our contemporary societies as they stand, Faye became yet more revolutionary. What account can we give for this?

Faye’s work itself is a school to us in the manner of a man living a candid life, clear of vulgar delusions, and utterly free of ressentiment, pettiness, cravenness and pusillanimity.

Faye did not, as we ourselves do not, live in ‘most times and places’; he lived in modern times, in a civilization which has dedicated itself for the better part of half a millennium to an essentially self-destructive ‘progressive’ regime – to the ‘improvement’ of its conditions and the expansion of its ‘rights’. Our contemporary societies are racing at breakneck pace along a railroad track which we know will end abruptly somewhere up ahead – perhaps on an open plain, perhaps on a mountain pass, perhaps on some bridge overriding an abyss. Faye intuited this coming disaster alongside of, and as a consequence of, his psychological realism. He thus found himself in a curious intellectual predicament: he could neither in good conscience attempt to change a world he knew was generally entropic and prone more to corruption than improvement, nor still less sit idly by, in the placid and ingenuous hope that patching up this or that crack in the dam will do anything to close the widening breach gaping over our heads.

What then to do, but to awaken as many of his kinsmen as he could, and to teach them – the art of swimming?

Upon this task he brought his warrior genius to bear: to prepare us all for war – not only the external war which falls upon nations and peoples, but the internal war which comes upon a man who has stumbled unawares into ambush and flames. He urged us unstintingly, we, who are alive in the fattest and most pacific of times, to train ourselves on the lean and hard discipline of the soldier. With that same genius, he transformed our greatest misfortune – namely, that there is almost nothing we can do to to stop the collapse of the world – into our greatest advantage – namely, that no better preparatory school can be found for our spirits than attempting the impossible, attempting to right a sinking ship, attempting to hold up a crumbling tower or to clean, with nothing less than an uncontrollable torrent, the reeking styes of Modernity. Faye’s work itself is a school to us – a school in mind if not moderation, a school in courage if not caution, a school in readiness if not restraint. More than anything, it is a school in the manner of Faye himself: the manner, so precious and so rare, of a man living a candid life, clear of vulgar delusions, and utterly free of ressentiment, pettiness, cravenness and pusillanimity.

Let us commend this Fayean spirit then to one another, for never shall we be the poorer for it.

Arktos Journal will be publishing an excerpt from each of Arktos’ translations of Guillaume Faye’s books, one for each of the next eight days. These excerpts can be taken by those who know Faye as homage to him, and a chance to reflect on the many things he has taught us; and for those who do not know him well, or perhaps not at all, it can be taken as an opportunity to court acquaintance with one of the founding fathers of the contemporary Right. We begin with the first Faye title published by Arktos, and indeed the first translation of any of Faye’s works into English: Archeofuturism, in that chapter dedicated to the term which forms the book’s title. The first installment of this series can be found here.

Eight titles – and with a ninth forthcoming. For Guillaume Faye’s final months on this Earth were spent in work befitting a man of his spirit: not listlessly did he pass them, nor in the grips of resignation or plaintive self-pity before that catastrophe called mortality, but rather labouring strenuously, and contrary the will and warnings of his doctors, to finish his last book with his last strength. He could have clung to his final days in this world and done all that was necessary to prolong them, and no man among us would have faulted him for it; yet with his warrior’s genius he put himself once more to the attack, set himself one more task and accomplished it, completing his final opus, Guerre Civile Raciale (Racial Civil War) before the end came. Truly it can be said that Faye’s life ended on a victory.

With that we take our leave of the man, consoled by the thought that in a certain but decisive sense, the man does not take his leave of us.

2See my essay ‘Not Our Catastrophe’. For more on Faye’s ideas in general, the first Interregnum podcast was dedicated to a consideration of his book Why We Fight.

3 It would be well for us to consider how to attain a measured embrace of psychological realism, dearth of which in some men of the Right hinders their efforts and activities, and surfeit of which in others compels them to an unmanly hopelessness.