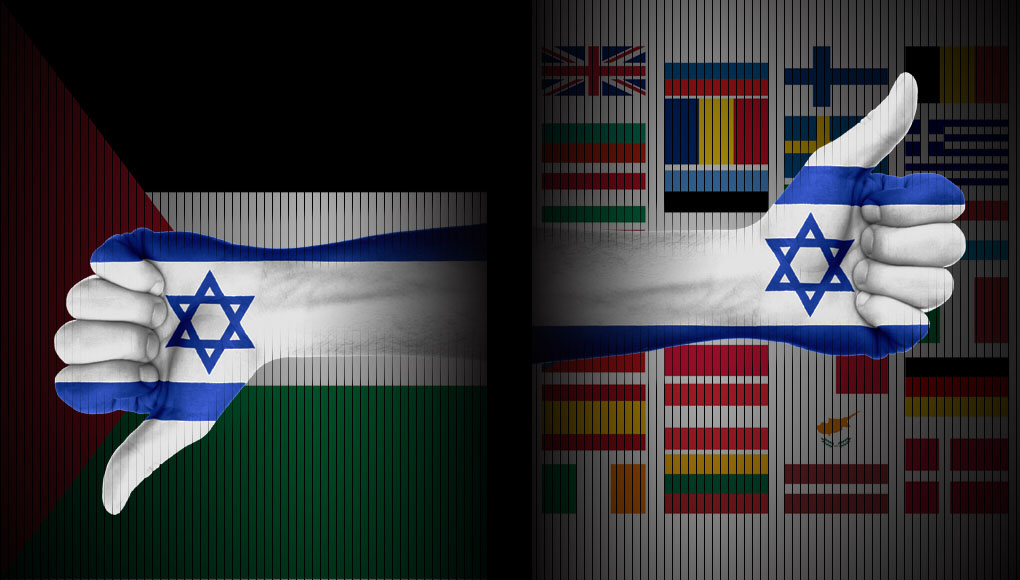 Anyone who has dealt with the New-Right structures in online social networks in recent years cannot avoid having observing a special, at first sight somewhat perplexing, paradox: supporters of the New Right, Western nationalists and even users with one foot in right-wing extremism, all of whom really care about Israel and Zionism. At the same time one notes as a counter-event, so to speak, persons associated with the left who do not seem to be able to align themselves fast enough with Palestine and pan-Arabic ideas.

The fact that the left has degenerated into the proverbial ‘useful idiot’ for an ‘avant-garde’ which actually pursues completely different geopolitical goals, is consistently ignored.

As far as anti-Zionism and Pro-Palestine sentiments on the left are concerned, this is nothing new. Especially in German-speaking countries, this phenomenon has a certain history: after all, Red Army Faction (RAF)1 terrorists were trained in the camps of the Popular Front for the Liberation of Palestine (PFLP) and then, among other things, issued a statement in November 1972 full of praise for the “Black September” conflict.2 There they wrote:

The Arab peoples have been mobilized by the action for the anti-imperialist struggle, they have celebrated the revolutionaries as heroes, their will to fight has been immensely encouraged.3

A few lines later, they scourge ‘Israel’s Nazi Fascism’. By today’s standards, the radical left was progressively relaxed with this accusation, considering that ‘Nazi Fascism’ refers to a massacre of Jews on German soil – even moreso in the former NSDAP bulwark Munich. A few years later, German left-wing extremist terrorists of the ‘Revolutionary Cells’ at Entebbe Airport were to segregate Jewish passengers in a hijacked Air France machine – something that sparked much debate within the left-wing scene and the public in general. Not only historically but also with regard to the current left, it is therefore amusing to find in the same text insults against the ‘Students of Marx’s Bible’ and ‘the stupid left’. One should know that the fighting ‘city guerrilla’ of the RAF had a glowing hatred for the ‘leftist mock heroes’ and ‘intellectual armchair revolutionaries’. Of course, hardly anyone in socialist nomenklatura today would dare to say such things openly, but the romantic idea of the ‘third world peoples as an anti-imperialist, revolutionary avant-garde’ has largely survived over the decades. The fact that the left has in truth degenerated into the proverbial ‘useful idiot’ for this ‘avant-garde’, which actually pursues completely different geopolitical goals, is consistently ignored. Among the current prominent representatives of this policy is the British Labor leader Jeremy Corbyn, who is still in the spotlight on account of his anti-Israeli commentaries and cliques. At the same time, the socialist social democratic and green parties of Europe are being pushed through by Muslim migrants, who are still fueling these efforts considerably. Furthermore, many Neo-Linkes consider their solidarity with the Palestinian people as a logical continuation of their own victimhood in the context of their identity politics – the political, religious and ethnic reasons of the oppressed police state. If you look long enough, you will always find an underdog to identify with, and Palestine is as likely a victim as any.

On the opposite side of the political spectrum, there has been a strong tendency on the part of the right in recent years to support Israel. What seems surprising at first glance is on closer inspection easily enough understood.

Israel is per se considered to be sacrosanct in the international community. Criticism of Israel – even if this criticism concerns only the state, its deeds or its agents – is often dismissed as ‘anti-Semitic’. Ergo, Israel can easily be used as a bolster for unpopular demands or decisions in the West, which Israel itself has succeeded in effecting. Two popular examples are the comparison between the wall in Israel and Trump’s border wall (which seems to remain in the realm of electoral promises), and the restrictive deportation policy against refugees and illegal immigrants in Israel and the United States respectively. European nationalists are especially attracted to the second of these points; here, they can submit their demands with reference to a real example, and the system press cannot protest against it, without opening itself to charges of anti-Semitism.

Another motive is the harsh Israeli attitude towards Palestinian extremists and (political) Islam. Israel has been in the hostage of Hamas and other Islamist-Palestinian groups for decades and vice versa (I deliberately refrain from discussing any background information here), and barely a month passes without a bomb exploding, shots being fired, or stabbing incidents – followed by military action against Palestinian areas. Therefore, it is not surprising that Israel is pursuing a ‘zero tolerance policy’ and, if in doubt, makes short work of it (the left-wing media unsurprisingly likes to talk about attacks by the Israeli army abstracted from any greater context of provocation and reaction). At least since the wave of refugees in 2015, this same form of terror has arrived in Europe permanently; but the demands for more protection and more uncompromising deportations in many countries faltered for a long time and were swept away with globalist, liberal persistence slogans. Some countries, such as Germany, Sweden or France seem to persist indeed. Therefore many right-wing protesters seek to compare the current situation of Europe with that in Israel and to demand a similar crackdown.

Our interference in foreign questions wastes a lot of energy, which would be much better invested and much more effective on the home front.

The third – and perhaps in many cases the most unconscious – reason for growing right-wing support of Israel is owed to the fact that Israel is an ethnostate.4 Israel is an unabashedly Jewish state through and through, and becoming a non-Jew citizen is equivalent to winning the lottery: Israel is literally a nation born out of ‘blood and soil’. At the same time, it is easily possible for Jews from all over the world to become Israelis and create a possible retreat for themselves in case of desire or need. This option was made known to a wider audience by a protagonist in Michel Houellebecq’s novel Submission. There are only a few states in the world that are so ethnically self-contained – Japan and North Korea are two further examples here – and that, of course, is very attractive to the European nationalist, to whom any public approach to patriotism is already subject to a potential blizzard of attacks and accusations. The extreme, dedicated defense and support of Israel in cyberspace can therefore be seen here as a substitute action. Here all the taboos can be broken, from outrageously radical slogans (a Zionist proxy ethnonationalism so to speak) to the ‘natural right of Israel’ (in Germany, this goes so far that the unconditional defense of Israel is part of the official raison d’etat) to anti-Islamist and racist attacks – all, of course, as long as it is in the service of the Israeli narrative.

Seen in this light, the rightists here – as the leftists have been for a long time – become useful idiots in a conflict in which they should really not (any longer) interfere at all. Our interference here wastes a lot of energy, which would be much better invested and much more effective on the home front. Granted, many of these pro-Zionist activists are also active in and for their own countries, but often in a much tamer way. Their engagement with Israel would be more understandable if the Israel vs. Arab world were truly a proxy conflict, but it is not. Israel does not care about the well-being of Europe; on the contrary, if it had been left up to them, they would have unhesitatingly simply forwarded their unwanted refugees to Europe,5 thereby exacerbating the European situation even more.

An important step in the fight against a globalized world is to stop shouldering global responsibility. You do not have to comment on everything, do not have to take sides everywhere, do not constantly have to offer a solution to each problem that arises on the global stage. It is good and important to have an overview, but that is as about as far as it should go. One should take the old adage to heart: ‘Swing the broom at your own doorstep’. Europe would thank you.

1This was a leftist and extremist militant organization formed in the 1970s which were involved in several acts of terrorism until their dissolution in the 1980s.

2This was a conflict in Jordan between the Jordanian Armed Forces and the Palestine Liberation Organisation, in which most of the action occurred in the so-called “Black September” of 1970.