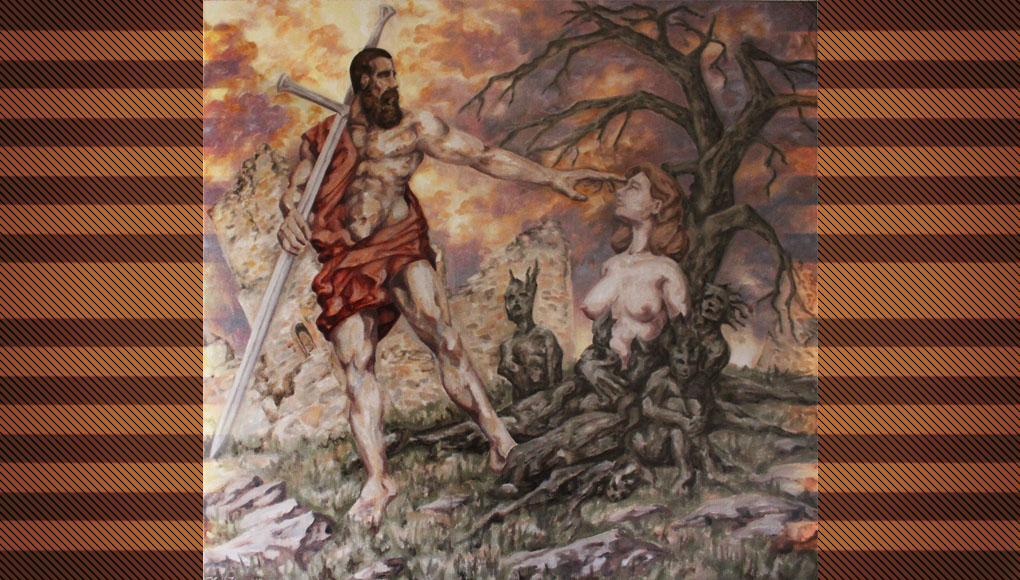 We of the Right require both Heaven and Earth, the Eternal and the Temporal.

If there is one overarching movement which can describe the Right of today, it is the movement towards the people and its identity, towards the blood and soil of the great Mother that is the Nation. The Right is steadily moving towards the realization that we are not abstract and interchangeable individuals, but inseparable from the concrete blood and body we were born into. Towards the realization that our identities, societies and cultures are not a floating construction of ideas or loosely defined “values” which change with progress, and which can be adopted and claimed by anyone outside of our own realm, but a firmly rooted tree which cannot be separated from the Nation, nor from the struggle of its people. And lastly the realization that we are put onto this limited earth as a mortal and hungry people among many others, and as sure as we all must proudly affirm ourselves and realize our own mission, so are we and our peoples destined to a never-ending struggle, and a cruel death at the end of our days.

The Right is steadily moving towards the realization that we are not abstract and interchangeable individuals, but inseparable from the concrete blood and body we were born into.

And this movement towards the Nation is understandable, for the tree that is Old Europe, the Order and Truth that was our great Christian Empire, has withered away, has become nothing but a grey trunk, cracked by the drought of modernity, and as such it has lost both its branches and its roots. And the soil in which it once grew, the soil of our European Nations, now lies bared under its pale skeleton. The Right of today has understood that this now naked soil, this great Mother of ours, needs a strong and healthy protector, lest it should fall to the ravage of other, hungering peoples; and the Right knows what a great disgrace and shame it would be for us, if we forsook our destined struggle as men, and let others plant their seed in she who is ours. Thus the Right has grown tired of conserving, of watering that tree which is already dead, and instead seek to cleanse our lands, both of those who threaten to destroy it, and of the dry firewood which can no longer grow, so that we can plant the seed of a new tree, of a Europe of Tomorrow.

And while this movement towards the Nation is both needed and true, it is nevertheless incomplete and broken – for while it reaffirms our birth by our Mother, it lacks that seed which truly gave us our life, and which is the only source of all order and value, namely the one and only Eternity, the great Father above.

This Father and spirit is the transcendent source of everything, the Eternal that chose to love the Temporal, the Being that chose to manifest itself through the Becoming, and the Complete which has chosen to grace the Incomplete, and as sure as he is the centre of existence, so must his spirit become the centre of us as men, and the unmovable axis which upholds our Nations. For he is the glorious sun who shines above all Nations, and just as no tree can grow unless it is capable to reach towards the rays of the sun, so no people can become that which it is meant to be, if it does not yearn and strive to reach and manifest the Truth of the Father.

Thus we of the Right must not be satisfied with only digging downwards, with only rooting ourselves in the womb of the Nation, for as men we are also destined to reach upwards, to soar the skies: we must complete a dual movement, which both rediscovers that celestial and absolute Truth which the foul fog of modernity has hidden from our eyes, and returns to manifest it in the struggle of our peoples. We must not be satisfied with only affirming the Nation and her existence, for we must fill her with essence; we must want to make her into a great and beautiful manifestation of Eternity itself, and to do that we cannot be satisfied with being mere National men, but must be as close to Holy men as we can be.

We need to become men who are daring and unwavering enough to travel the narrow and lonely path towards the heavens, all by ourselves – men who can pierce all storming and thundering clouds with the spear of the soul, and reveal the burning face of Truth beyond. For beyond the fog rests Eternity among his infinite blues, as unmoved, untouchable and pure as he has always been. It is up to us whether we will allow him to stay forgotten, or yearn to reach him once again; whether we will choose to stumble in the blind darkness of the womb, or struggle to be born again, to let the golden rays of the sun kiss our naked foreheads, and reveal to us the path of our destined struggle.

But to be instead only a National man is to tell our great Mother that she is complete by herself – to tell her that she is independent and self-sufficient, that she is the source and goal of all our life and struggle, and that she is the one who creates all values and beauty in life. And by doing so, we will misguide and betray her, for we will hide from her the man she is destined to love and serve, the great Father whose children she must carry, the spirit and order that will fill her breast with warmth and meaning. The National man surely has good intentions, wanting to honor and make prosper the dear Mother Nation that birthed him, but in reality he is robbing her of her true duty and joy as a woman – for it is only the great and eternal Father which can give her womb the flaming seed of Life and Truth. And if we only have the Nation, and she is without the Father, we too will be as hollow, barren and sad as an old and dried up womb which never knew the seed.

Thus we of the Right must not be satisfied with only digging downwards, with only rooting ourselves in the womb of the Nation, for as men we are also destined to reach upwards, to soar the skies.

We must remind her of what she has forgotten, of the great and redeeming love from above, and of her true destiny as the bride of Eternity itself. And by doing so, we will be reborn as the children we were always meant to be, as men of both the Father and her, of both Heaven and Earth, as the loved link between the Eternal and the Temporal. And our struggle will be heightened into a short and vanishing, yet eternally beautiful, artwork of Truth.

And only when we have done this, will we grow into the tree of Europe Tomorrow. And I know with certainty, as evidenced by the zealous and joyous will to power and will to sacrifice that is budding within the breast of us men of the Right, that this tree will grow as no other tree has ever grown. I know that if we only reveal the Father again, if we only see and accept his light, there will be nothing on Earth that can stand between us and our glory. I know that our peoples will grow into mighty and noble oaks, dressing our dear Mother in the green of summer, and I know that we will bask in the warmth of Eternity, dancing in the lustrous crown of leaves, reflecting the rays of the sun in every movement of life.

And the inevitable day that autumn comes, the day when fate once again forces us unto our knees, to strike its sword into our tired necks, I know that we will not let ourselves become a withered tree, cracked and humiliated under the yoke of darkness; that we will not compromise and beg in order to live another day, but that we will fall proudly with the wind, glowing with Nature’s brightest reds and yellows. I know that we will fall like the sun himself, when night comes and he chooses to tread down to his woman below, and that our blood will gush and flow like the flaming kiss of sunset. And in the wake of our twilight, I know that there will be sons to once again shoulder the eternally recurrent struggle, and sow the seed of a new tree of their Tomorrow.

This will be the beauty of our unending struggle and our inevitable death, if we once again let the breath of Heaven fill our empty hearts – if we once again turn our Nations into the bride of Eternity.