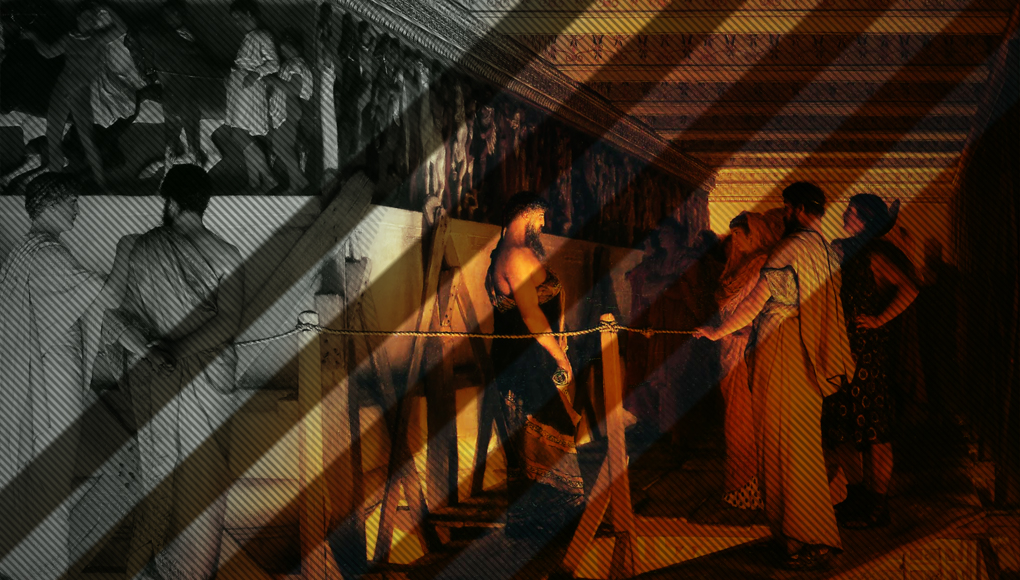 Taken from Lawrence Alma-Tadema — Phidias Showing the Frieze of the Parthenon to his Friends, 1868.
John Q. Publius

A comparison of contemporary democracy with classical democracy, via the analysis of Polybius and Plato, can give us greater clarity on both.

Despite the commentariat’s deep concern that American public figures from Huey Long to Barry Goldwater to Donald Trump ‘imperil our democracy’, few can articulate why, exactly, this is the case, and even fewer can precisely define what they mean by democracy. In the first place, in the United States, we do not have a democracy to imperil. We have a republic, with a Constitution that, according to John Adams, was intended for a moral and virtuous people, and a homogeneous one at that. In the Federalist Papers No. Two, John Jay argues that it is the relative homogeneity and common ancestry of the American people that allows for the success of the kind of hybridized republic Jay and his compatriots espoused, and which was ultimately implemented in the form of the newly ratified Constitution which took effect in March, 1789. Per Jay:

It has until lately been a received and uncontradicted opinion that the prosperity of the people of America depended on their continuing firmly united, and the wishes, prayers, and efforts of our best and wisest citizens have been constantly directed to that object.1

Transformative immigration threatens the integrity of the republic because there can be no common consensus in a tribal landscape.

Transformative immigration threatens the integrity of the republic because there can be no common consensus in a tribal landscape, just as a decline in morals and virtue, both civic and personal, creates an environment of self-gratifying individualism. Democracy in both cases caters to peoples’ worst impulses. Not coincidentally, the degradation of the integrity of the Republic has coincided with the extension of the franchise from a limited group of men of character and private property ownership – which for the era was a decent barometer of an individual’s actual investment in the nation’s future and fortunes, as well as his own (relative) intransience – to in some cases literally everyone, even non-Americans and the deceased. These are hardly the conditions of ideal governance, for as Polybius wrote in his Histories:

There are two things fundamental to every state in virtue of which its powers and constitution become desirable or objectionable. These are customs and laws. Of these the desirable are those which make men’s private lives holy and pure, and the public character of the state civilized and just.2

Following the at minimum century-long impoverishment of the Occident through moral degradation, civilizational ennui, two suicidal world wars, an infatuation with destructive and de-humanizing ideologies such as communism and unbridled capitalism, and transformative mass Third World immigration, the United States and many of its kin in the West are scarcely countries anymore, let alone nations. The Stanford Encyclopedia of Philosophy first differentiates between a nation and a state – ‘whereas a nation often consists of an ethnic or cultural community, a state is a political entity with a high degree of sovereignty’ – before elaborating that nationalism

The word ‘nation’ is derived from the Latin natio, which translates as ‘native place’, birth, people, race, and class. It implies a natural aristocracy of its own people. Montserrat Guibernau defines the nation as ‘A human group conscious of forming a community, sharing a common culture, attached to a clearly demarcated territory, having a common past and a common project for the future and claiming the right to rule itself’.4 The nation, then, is not just a parcel of land but a reflection of and testament to its people. Only in such conditions can a true democracy form. For Polybius:

It is not enough to constitute a democracy that the whole crowd of citizens should have the right to do whatever they wish or propose. But where reverence to the gods, succour of parents, respect to elders, obedience to laws, are traditional and habitual, in such communities, if the will of the majority prevail, we may speak of the form of government as a democracy.5

Democracy as it is presently construed and democracy as it was intended are very different indeed. Not only must a people be truly one people (from the Greek δῆμος, ‘the people’ with the suffix -kratia from κράτος, ‘power, rule’), but even in the much-vaunted Athenian democracy, only around one-tenth of the population was eligible to vote. Only adult male citizens could hold official positions, serve on juries, or participate in the Assembly. Women, foreigners, and slaves were categorically excluded. Regarding women, I find the following quote from Kate O’Beirne’s piece, ‘The Political-Knowledge Gender Gap’, to be particularly insightful as to why the ancients mightn’t have felt it prudent to extend women the franchise:

Three-quarters of women score well below the male average on tests measuring knowledge of national politics. This particular gender gap is at least fifty years old, and it exists between men and women of equal education and income levels. Women’s lack of knowledge is in part due to their lack of interest in politics. According to the National Opinion Research Center, 53 percent of college-educated men under the age of 30 read a newspaper daily, compared to only 34 per cent of their female counterparts. And the gap opens at an early age. A national survey of schoolchildren found that boys are significantly more knowledgeable about politics than girls, even after controlling for background and curriculum. Quite simply, it may not be in women’s nature to care very much about politics.6

Further, for the Athenians, the idea of a Corinthian or Spartan voting participating in Athenian democracy let alone someone from another culture entirely – was patently absurd. Yet today in the United States and many other Western nations, one need not be a citizen (or even alive, evidently) to cast a ballot on the nation’s future trajectory. To ‘elect a new people’, as Bertolt Brecht sardonically wrote in his poem, ‘The Solution’, is fundamentally anti-democratic, and thus illiberal, so far as classical liberalism goes. So when the Left uses the trope that ‘[Blank] is a threat to our democracy’, it is engaging in sophistry, firstly because in the American context we are meant to be a constitutional republic, and secondly, because their construction of ‘democracy’ betrays the very essence of true democracy.

For the Athenians, the idea of a Corinthian or Spartan voting participating in Athenian democracy was patently absurd. Yet today in the United States and many other Western nations, one need not be a citizen (or even alive, evidently) to cast a ballot on the nation’s future trajectory.

One of the major themes in Book Six of Polybius’s Histories is that for each of the three legitimate forms of government (as derived from Plato) that he outlines, there is a corresponding pathological or ‘anti-’ version. The pathological and corrupted version of a kingship is a tyranny; of an aristocracy, an oligarchy; of a democracy, an ochlocracy, or mob rule. He views the corruption of each as inevitable, showing an acute understanding of both human nature and the nature of history. For each system, the inevitable breakdown occurs, followed by a reformation and transition to another form of government. He states:

So then we enumerate six forms of government, – the three commonly spoken of which I have just mentioned, and three more allied forms, I mean despotism, oligarchy and mob-rule. The first of these arises without artificial aid and in the natural order of events. Next to this, and produced from it by the aid of art and adjustment, comes kingship; which degenerating into the evil form allied to it, by which I mean tyranny, both are once more destroyed and aristocracy produced. Again the latter being in the course of nature perverted to oligarchy, and the people passionately avenging the unjust acts of their rulers, democracy comes into existence; which again by its violence and contempt of law becomes sheer mob-rule.7

In the context presented, we can consider the aristocracy to be a republic fashioned on the kind in Rome or perhaps the early United States. The reader will certainly be familiar with the trope, ‘[Insert hysterical talking point here] is a threat to our democracy!’ As time has progressed, the United States moved from its aristocratic roots (again, aristocratic here in the context that Polybius uses it) to an oligarchy, which Revilo P. Oliver believes fully manifested itself beginning with the Franklin Delano Roosevelt presidency. The oligarchy would of course be the various extraordinarily wealthy and cosmopolitan groups that supplanted the old Anglo-Saxon stock, the original founders and builders of the United States, and that had begun to exert their wildly disproportional influence, which has not diminished with time. The ‘turn’ to democracy began before FDR with the direct election of Senators and the continual expansion of voting rights, but history shows that these transitions in government often overlap. In grappling with the push for open borders, voting rights for illegal aliens, and conditions closely fitting Sam Francis’ definition of ‘anarcho-tyranny’, we are presently witnessing the onset of mob rule, albeit one still tenuously directed from ‘the top’. Polybius continues:

No clearer proof of the truth of what I say could be obtained than by a careful observation of the natural origin, genesis, and decadence of these several forms of government. For it is only by seeing distinctly how each of them is produced that a distinct view can also be obtained of its growth, zenith, and decadence, and the time, circumstance, and place in which each of these may be expected to recur. This method I have assumed to be especially applicable to the Roman constitution, because its origin and growth have from the first followed natural causes.8

Building on the ideas of Plato and Aristotle, Polybius’s concept of anacyclosis – that each of the three aforementioned benign forms of government inevitably becomes corrupted due to its inherent weakness and instability and eventually deteriorates into its malignant version – is contrasted with Roman Republicanism, which is meant to be more durable since it contains elements of all three. As evidenced above, however, this does not mean republics are indestructible nor incorruptible. This idea of the life cycle of societies and civilizations has been explored by a number of historians and philosophers in the modern world, no one more compellingly than Oswald Spengler in The Decline of the West (1918, 1922).

Spengler, interestingly, separated our modern Western culture (Faustian) from that of classical antiquity (Apollonian). Certainly by the fifth century Apollonian civilization in the western half of the Mediterranean was dead; the Byzantine Empire, however, flourished for another thousand years, and as one silver lining to its fall in 1453, many scholars and archivists fled west, contributing to a re-awakening Apennine Peninsula through an infusion of ancient texts that had been thought lost. This conjoining of energies manifested itself in the Renaissance, which launched the Western world to its centuries of unprecedented greatness. Those energies appear exhausted now, and the question is what comes next?

3Source can be found here.