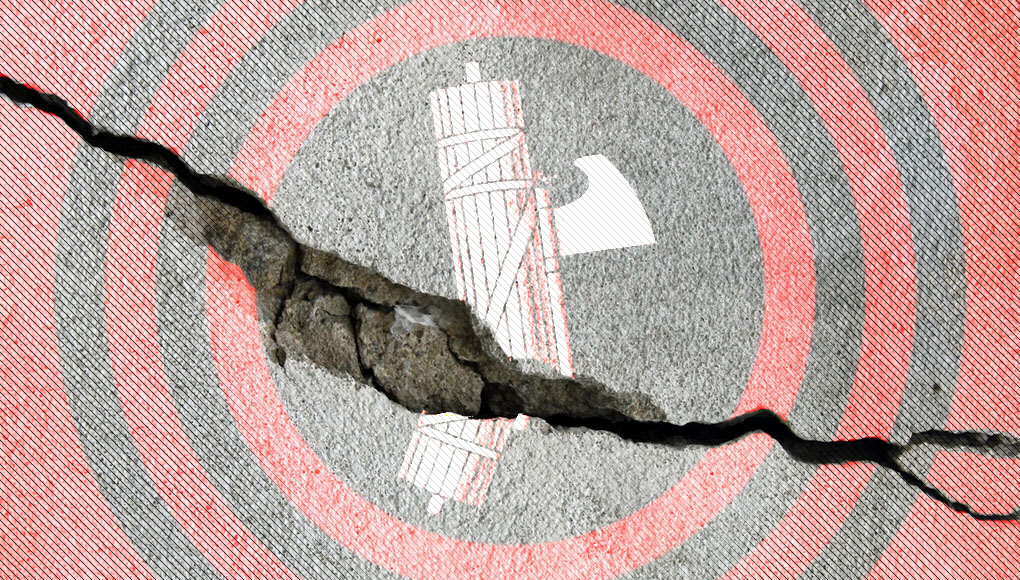 So long as Marxists hold power over key terms in our common language, Marxism will continue to permeate the West.

Fascism is a genus of political ideology whose mythic core in its various permutations is a palingenetic form of populist ultra-nationalism.1

The above is Roger Griffin’s ‘formula’ for Fascism. This is gate-keeping par excellence, and the perfect tool to use against a public that does not approve of the direction their country is going in: ‘You are opposed to cosmopolitanism? Or to the presence of religions that seek to destroy your way of life [and are, as Christopher Hitchens said multiple times, more of a threat to people on the Left than anyone else]? You fascist!’

The only way the Right can really oppose the weaponization of the term ‘Fascist’ is though humour.

You don’t even have to be on the Right at all to have this weapon used against you. By the logic of the modern far-Left, communists in the early twentieth century would be considered Fascists, as professor Paul Gottfried observes:

The older socialist orientation did not predispose its adherents toward or seek to promote open borders, free trade, sexual self-expressiveness, and the submergence of the dominant Western culture into the flux of incoming ethnic minorities. Multitudinous facts and sources indicate that working-class socialists generally opposed immigration (American unions were vocally active in supporting the Immigration Act of 1921), favored protectionism, and had no special affinity for multicultural politics.2

It is worth noting that a lot of people seem to believe that the Marxists abandoned defence of the working class in favour of ‘social justice’ upon realising the failures of the Soviet Regime. Here we must disagree. Social justice ideas already existed in Karl Marx and Friedrich Engel’s writings. Granted, as many people are aware, Marx’s writings on race and on his fellow Jews are very much opposed to ideas of the modern Left. It is more of a shift on emphasis that occurred – followed by a shift from reality to insanity.

But I digress. Let’s ‘deconstruct’ Griffith’s formula above:

This term simply means ‘rebirth’. It signifies the idea of aspiring for a national rebirth, like a phoenix rising out of the ashes.

[T]he vision of the (perceived crisis of the nation as betokening the birth-pangs of a new order. It crystallizes in the image of a national community, once purged and rejuvenated, rising phoenix-like from the ashes of a morally bankrupt state system and the decadent culture associated with it.3

I must ask, Dr. Griffith: is the Left not gripped by precisely this same attitude whenever the Right is in power? Are traditional values not precisely a ‘morally bankrupt system’ so far as the Left is concerned?

Bear in mind that the word ‘myth’ itself does not just mean ‘mythology’, like that of King Arthur, Perseus and so forth. The way Marxists view figures like Lenin or Trotsky is itself mythological. As mythology is commonly defined in academia: “‘Myth is ideology in narrative form.’4

The interesting thing about how Roger Griffin defines ‘mythic core’ is that he seems to take issue with how the idea of a national community is presented in a sort of romantic form. Nationalism itself, and not just Fascism, romanticises the nation. He talks about the ‘Nazis’ cry of “Germany Awake”, the British Union of Fascists’ campaign for a “Greater Britain”’ – yet this isn’t something unique to Fascism at all, and these ‘academics’ know it. Griffin should just be honest and speak his mind.

What is the separation between ‘liberal’ and Marxist ‘Fascist studies’? ‘Liberals’ will use the terms ‘ultra-nationalism’ and ‘nationalism’ and pretend they are talking about two different phenomena; Marxists will at least be honest and state that they oppose nationalism as such.

Ultra-nationalism is (apparently) an extreme devotion to your own nation; you put your nation above others. (And why wouldn’t you? Why would you want your nation to ‘better’ other nations? Where you live should be of primary importance to you; why should we assist any other nation that does not reciprocate the help that we give them? Why should any nation take on the responsibility of a dependent nation, how does making another nation entirely reliant on us help them in the first place?)

On page seven, Griffin states: ‘By its nature fascism is racist, since all ultra-nationalisms are racist in their celebration of the alleged virtues and greatness of an organically conceived nation or culture.’ But then he immediately continues with:

However, fascist ultra-nationalism does not necessarily involve biological or Social Darwinism concepts of race leading to eugenics, euthanasia, and attempted genocide. Nor does it necessarily involve anti-Semitism, or hatred directed against any particular group perceived as culturally or genetically different.

Fascism is by nature racist because people celebrate their race’s success, but fascism does not have to be racist either? What does he mean? He doesn’t mean anything at all by this; he is leaving a void to ensnare anyone who happens to be a nationalist, but who at the same time does not deny the existence of race. So, if you are a professor of biology and you are Right-wing, I am sorry to inform you, but you are a fascist.

This is a term we are very familiar with at present; we hear it ad nauseam, mostly with negative connotations. As put by Alain de Benoist in is essay What is Populism:5

It has become a political insult or a failure for the views of its opponents, accused of awakening the dangerous inclinations of the working classes and used by the ruling classes to stigmatize those who reproach them for having annexed power for their exclusive use.

Thus, a populist politician is someone who is accused of ‘pandering to the masses’ – or to put it truthfully, it is a politician who bases their policies on what the public actually want instead of what corporations, academia and inner-city dwellers want. Oh, what a terrible thought! Imagine actually being a democratic politician in a ‘democratic’ country!

We saw the perfect example of this [anti-populist rhetoric] in June 2016 after the decision of the British people to leave the European Union. […] Bernard-Henri Lévy saw in Brexit the ‘victory of the most rancid for of sovereignty and the most idiotic form of nationalism’, Jacques Attali saw the ‘dictatorship of populism’, Alain Minc the victory ‘of ill-educated people over the well-educated’. All of them [wondered what could be done to overturn the vote]. Some said it was not necessary to consult people, who know nothing about the issue and will say whatever. Others say our priority is to stop this from happening again at any cost.

This last sentence is the most concerning. The media, academia and so forth tell the public the ‘populism’ is a dirty term. The general public rely on ‘authoritative sources’ to inform them; they do not desire and/or have the time to look into every single issue, to study politics, philosophy, anthropology, sociology, etc. and therefore to understand exactly how badly they are being hoodwinked and manipulated by those in charge of what the spectacle forces into their minds. A few more points from Alain de Benoist are worth quoting before we continue:

[S]ome people, such as international lawyer Larent Cohen-Tanungi, simply propose banning referenda in the European Treaties. Others argue that certain issues be protected from the popular vote as a matter of principle, and that the ‘majority level’ be increased to 60 percent (why not 90 percent?). Jean Claude-Juncker had already said: ‘There can be no democratic choice against the European treaties!’

This same argument has been used against those who voted for ‘Brexit, while in the United States, Donald Trump also achieved his best results amongst those with fewer qualifications. Whereas, in the 1950s and 60s, nobody reproached Communists Party voters for lacking in qualifications, now it is implied that a lack of education automatically makes one receptive to simplistic and harmful ideas. Higher study becomes a guarantee of a predisposition to adhere to the right ideas – which is laughable. We might just as well argue that the least educated are also the least conditioned by the dominant ideology, and that the more cultivated people are in reality the most inclined to parrot fashionable mantras and the identify with social conformism.

It is definitely easy to denounce the ‘fears’ that are said to feed populism, and particularly the people who ‘manipulate’ these fears, but we would do better to ask ourselves about their causes and their foundations.

As true as this final statement is, elites like Roger Griffin will merely say that these causes and their foundations are populists. If you reply to these elites with, ‘Well, no, populists play to an existing fear, they do not create the fear’, they will then reply (if you catch them in a rare moment of candour, at least) that ‘The public are just seeing things, they are sheep that need to be herded by the “better educated” who are superior to those who actually live in problematic areas, as opposed to people like myself, in our nice safe gated communities, wandering aimlessly in a fantasy land far from the working-class.”

The only way the Right (and I am speaking to the entire Right, not just a portion that agrees with me, but anyone and everyone who considers themselves Right-wing) can really oppose the weaponization of the term ‘Fascist’ is though humour. While the term still has its power there will be no successful Right-wing movement. Marxism will continue to permeate the West regardless of whether or not any existing Right-wing party is in power. The Marxists’ hold on academia will allow the continued indoctrination of Marxist views into each generation.

While the term ‘Fascist’ still has its power there will be no successful Right-wing movement.

The public at large, who are not engaged in politics, will continue to fear expressing their opposition to the changes occurring around them; they will fear that this term will be used against them. No action will be made by these people until a crisis point is reached and each one of them is individually impacted by whatever events lie in the future. That is how the West has become, with most people staring blankly at screens, watching TV shows and movies, numbing themselves with an assortment of medications they do not really need – prescribed to the public on order, so as to keep them subservient, unhappy perhaps with what is occurring, yet doped up enough to prevent them from thinking dangerous things like, ‘Maybe change is possible’. The only thing that will startle these people is something occurring directly to them. Videos on screens of what is occurring is never really enough – not unless it is something enormous. What we see on the screen is different to what we see in front of us; what happens in front of us is an Event in our individual world, while what we see on the screen is an Event away from us.

If we can end that fearful element in the public, that almost neurotic fear of the word Fascist, then that would mean the removal of an enormous barrier to change, to actual action.

2Gottfried, Paul, Multiculturalism and the Politics of Guilt: Towards a Secular Theocracy (USA) University of Missouri Press, 2002), 30.

4Lincoln, Bruce. ‘An Early Moment in the Discourse of ‘Terrorism: Reflections on a Tale from Marco Polo’, Comparative Studies in Society and History, 48/2, 242–259.