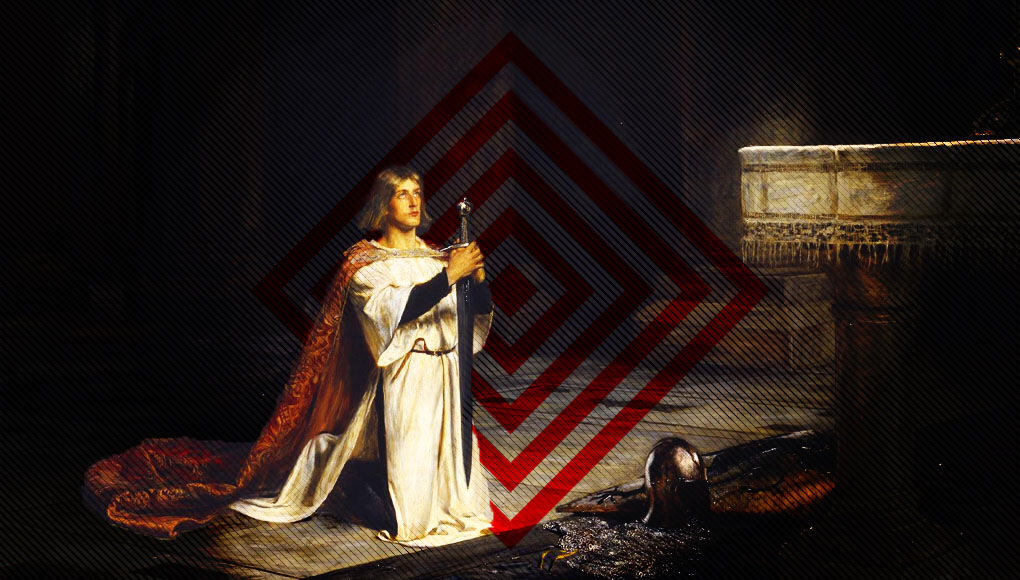 From John Pettie, The Vigil, 1884
Julius Evola
Series: The Meaning of Aristocracy for the Anti-Bourgeois Front

What could bring about a rebirth of the aristocracy?

If heredity is a condition and traditions cannot be invented, it would be logical to seek in existing aristocratic lineages at least a part of the elements necessary for the work of which we have spoken above; in this way, the anti-bourgeois struggle could be brought to its terminus. Unfortunately, there are various difficulties with this solution in Italy. The principal of these is to be found in the fact that the Italian nobility was only minimally a feudal nobility. Now, the relation between title and power is the inescapable condition of any true aristocracy. It is necessary to have land, over which one can exercise a kind of partial sovereignty, putting to the test one’s capacities of prestige, of responsibility, of organization and of justice; land is required to love, to protect and to transmit, just as the tradition itself of the name and of the blood; such land is the material basis for the decorum and the independence of a family. This has been the state of affairs but little in Italy. Too many titles of nobility have been conferred in the past, light-heartedly by the ruling houses, as the simple ornaments and instruments of a mundane vanity, if not even as signs of corruption; for whoever has a title but no power or wealth, and who is absorbed by the vanity fair of salons and courts, is ever exposed to the temptation to procure for himself every expedient and means to keep to an artificial and conventional style of life. And it is commonly known to what extent this has facilitated the manoeuvres of Jewish infiltration.

Too many titles of nobility have been conferred in the past, light-heartedly by the ruling houses, as the simple ornaments and instruments of a mundane vanity.

At the same time, there has been no way in Italy to systematically employ a specific noble lineage in the role of a true political class, to constantly place before the nobleman functions and clear tasks which are natural to him, in which he may test his real capacities and impede the stagnation, the depression or the decadence of that which blood and tradition have gifted to the individual. And various other circumstances beyond these have brought it about that the present conditions of the aristocracy, even the Italian aristocracy, are something less than ideal.

Let no one at this point mention the exceptions. We are not speaking of exceptions; even a certain portion of the bourgeoisie could assert its exceptions. We are speaking rather of a visible and homogeneous elite, which bears witness in an unequivocal way to the spirit and the level of a civilization and a society, by representing a tradition in the highest and most spiritual sense of the word. Now, it would be hasty to point to anything that even remotely approaches this within the salons and the circles of our so-called ‘high society’, a milieu in which every kind of creature gathers, every kind of ‘good name’, but, at the same time, also snobbism, internationalism and frivolities of every kind. Let us call things by their proper name: if there is any real antithesis to true nobility, it is constituted precisely by this ‘worldly’ and profane aristocracy, made up as it is by painted matrons and semi-virgins rushing from one tea party to the next, from one flirtation to the next; it is peopled by bridge-players and impeccable executors of the most exotic and ridiculous dances – a true vanity fair of every superficiality, gilded and cosmopolitanized to hide its intellectual vacuity and its spiritual scepticism – even when it opens its doors and invites to its luncheons and its cocktail parties the ‘brilliant’ literati, the novelist of the moment, the laurelled critic, the journalistic pontificator. Where is that hardness, where is that ascesis of power, where is that contempt for vanity proper to aristocracy, back when it was truly a dominant caste? What has become of that ancient Aryan title of the aristocrats, ‘The enemies of gold’? The inbreeding of the international nobility with American girls, as rich as they are stupid and presumptuous, and with the Jewish plutocracy as well, is a well-documented fact and, while it fortunately has not reached among us the dimensions it has in other nations, still, even among us, how many today are not wont to confound superiority with affluence and to welcome in the parvenu who has learned the fashions of the clique and who, by means of the right connections and even of feminine wiles, has been introduced into ‘high society’? And if in certain circles of the so-called ‘black nobility’1 or the like, worldly, cosmopolitan and modernist unscrupulousness has not yet conquered a certain traditionalism, still, in this traditionalism, what really subsists of the true and living traditional spirit, of its strength and its ascetic and heroic intransigence — all of which has nothing to do with conservative conformism, with prejudice, with moralism?

The problem of a new anti-intellectualist, ascetic and heroic aristocracy, almost feudal or barbaric in its hardness and in its refusal to attenuate its forms – an aristocracy which is not improvised, but which legitimates itself with a tradition and with a ‘race’ – is fundamental. By it alone can bourgeois civilization be overcome, not with newspaper articles, but with deeds; by it alone can we arrive at a qualitative articulation of the State beyond totalitarianism, as has been discussed. But this problem is every bit as fundamental as it is arduous to resolve. To what extent can we seek a reawakening and a reintegration of those qualities which have become latent or degenerate in the surviving nobility? To what extent will it be necessary instead to ‘begin anew’, to force ourselves to create the germs of a new nobility – one not defined by individual merits or abilities of the secular and bourgeois sort, but by a superior formation of life, which his to be jealously transmitted to a future posterity?

It is certain at least that we must prevent possible confusions, and must do everything in our power to see to it that the dead be divided from the living. The fact that there is a group of people who have the right to carry a noble title only because the Consulta Araldica2 has recognized it to them, and because they live an ‘orderly’ life so far as regards bourgeois conventions and the Penal Code, represents, so far as we are concerned, something lethal to prestige, potency and the possibility of the revival of the true aristocracy. We hold that traditional titles, which serve no end if not inflaming private and worldly vanity – which is to say, artificially clearing a path for that vanity – we hold that these titles are incompatible with the realistic spirit of fascism and, at the same time, that they should be the objects of a clear contempt on the part of whoever is truly aristocratic and desires the aristocracy as a potency and as a reality, not as mere smoke and decorations for the Parisian salons. We hold that a revision, a selection of the nominally heraldic nobility is incumbent. If having a bourgeois soul gives one the right to carry an aristocratic title, it is clear that this title is no longer worth anything, that it no longer signifies anything; it is the instrument, not of distinction, but of confusion.

The test to which the surviving nobility could be put, toward the end of discrimination, would be at bottom easy enough. It is a question of constraining them to not renounce what they are. As in the traditional civilizations, a title, a power and an office must be once more united indissolubly. Whoever has a title and is a man must be excluded from the empty life of the salons, of tea parties, of fashionable hotels and of the ‘high society’; he should be constrained to take up once more that which belonged to his fathers – if his nobility is true – and which he, in the modern world, has cheerfully renounced so as to degrade himself in the worldly life: with his title, he should be constrained to assume a charge and a power, an absolute responsibility, and to do this with the understanding that it must be natural for him to give to an extent that would be exceptional and unnatural for others. Only should he pass this test could his title be confirmed and come to mean anything.

It matters not if in this trial by fire many will fail. That will do nothing but good for the aristocracy. Indeed, this is the unique condition by which the aristocracy will be able to rise again, selected and dominant, offering precious elements for integrating the political hierarchy of the new State with a kind of New Order, whose efficacy is derived from its qualities and its lofty interior bearing. Without the emergence of this Order, it will be difficult to supply its absence with surrogates, and the present confusion will persist: there will be an aristocracy of the spirit which is not that of class, not the patrician aristocracy, and there will be a patrician and heraldic aristocracy consisting of the marginal survival of a true aristocracy of isolated individuals, all wavering amidst the fog of bourgeois imitations of elitism. The hard, Roman construction of the new State, especially if it should be put to the test of a grand new heroic experience, is destined to swiftly rise above this fog.

1Italian, nobiltà nera. Reference to the nobility which maintained their faith with the Pope when the Savoys conquered the Papal States in 1870. The term referred to the fact that these nobles kept the doors of their palaces closed, to denote the Pope’s self-imposed confinement. The term remained in use even after these events to denote that portion of the Italian nobility which maintained a more or less traditionalist Catholic attitude. In more recent decades, some of them threw their support behind Archbishop Marcel Lefebvre, founder of the anti-Vatican II fraternity, the Society of Saint Pius X. —Trans.

2The ‘College of Arms’, established in 1869 to advise the newly united Italian government on matters relating to heraldry, nobility etc. —Trans.