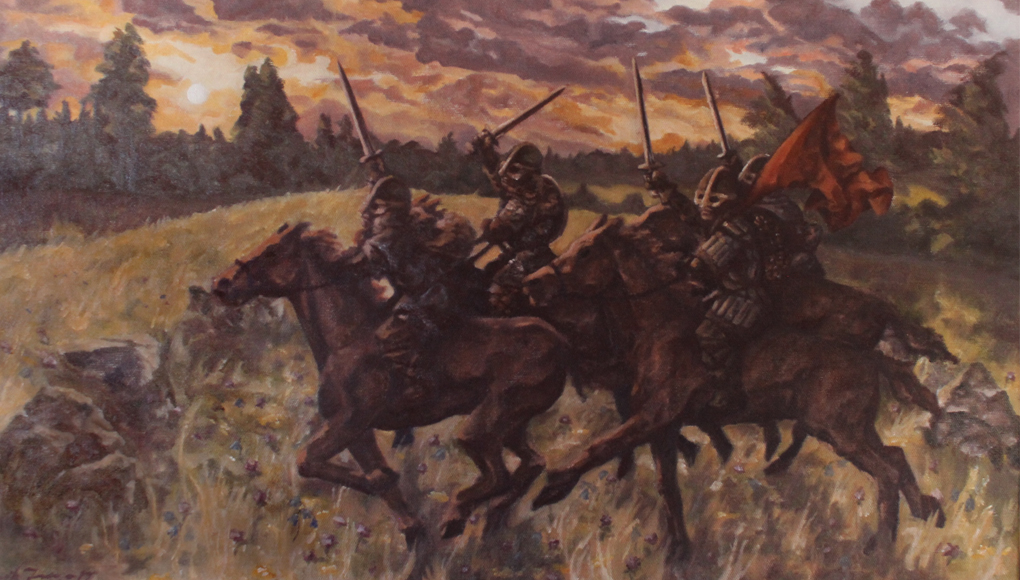 From the interpretation of Mafarka the Futurist presented in the first part of this essay, the goal of futurism appears as an affirmation of pure virility, and the love of the spiritual woman as power, in order to reach a transcendent union between matter and spirit. Out of this conclusion we can explain the futurists’ renouncement of all old ideals, and their peculiar nationalism.

Concerning ideals, we could call an ideal a perfect form, or the most beautiful part of Becoming, but in the end it is in itself just Becoming, and its value depends on how it is used – if its user sees it from above or from below. A man of high spiritual race, a man who has experienced Being, recognizes in the ideal an expression of that same essence which is at the root of himself. When he embraces the ideal, the result is the synthesis between matter and spirit, and the ideal righteously shines with the glow of eternity. It is not the ideal that restores the man, but rather the man that restores the dormant and passive ideal to active Being. Thus a man who truly stands above Becoming, through his dignity and might, is not bound to any single ideal – the Aryan concept of transcendence is to reach beyond good and evil, at the fullest sense of the phrase. He has the power to devour every form of Becoming, to reach and embrace the core of Being in even the lowest of things, and to point every form of beauty upwards, weather it appears in something ideal or depraved. This is the sign of the overman, who as pure Being loves the world and his fate, whatever it throws at him.

The true relationship with the ideal is something reserved for the very few, those divine sons of the gods who seem to breathe eternity in their actions and art.

To act beyond ideals is something characteristic of the hero or the awakened one – sometimes his act is immoral or even vile, but it does not matter, as the source of the act is something higher. Often the cruelty of the hero enhances the impact of his sublime greatness. One example is Achilles, who abandons his kin and his friend Patroclus in battle due to his anger, and dishonourably mutilates the body of his worthy equal Hector due to the same anger. But Achilles’ anger is not a phenomenon of Becoming, but rather a divine wrath, the manifestation of his divine blood through the warrior’s unbound violence: he is completely self-sufficient in his wrath, in his Being, and thus he is not condemned by antiquity, but worshipped as one of the greatest heroes, one who sacrificed himself and everything for the sake of his superhuman will.

It goes without saying that this true relationship with the ideal is something reserved for the very few, those divine sons of the gods who seem to breathe eternity in their actions and art. The great masses view the ideal from below; they live more or less under the feminine sign of Becoming, and, as they cannot be masculine Being by themselves, they need to be given truth from outside. In a healthy, Traditional society, they are given imperatives by the divine kings, but when those of higher being are not there to fill the ideal with Being, the ideal becomes twisted. Given over to his own judgement, a man of the mass can only view the ideal as a dogma, as he believes that it is the ideal in itself which carries true Being; the realm beyond good and evil is completely inaccessible for his spiritual race. He believes that dogma is the source of everything else in the world of becoming, which robs the rest of the world and his act of true being; or even worse he believes dogma to be the source of spirituality and Being itself.

To further depict dogma, we can use the suggestive duality between Man and Woman. A dogma is a lack of virility, the inability of the masculine power to act on the feminine power as she is. The first type of dogma is like a fetish, where one part of Becoming is thought to be the only true Becoming and the source of every action, material or spiritual – the dogmatist becomes like the man who cannot love woman if she does not fulfil his fetish, or at the extreme he whose source of arousal is the fetish, and not the woman herself. The other type of dogma is like the romanticizing of a woman. Here the dogmatist mistakes a part of Becoming with Being, which robs them both of their value – he is like the man who projects his own masculine feeling of virtue, honour or modesty on the the woman he loves (which are spiritual concepts which she can’t truly grasp, but which she can manifest as the will of her man), and also give these as the reason why he loves that woman. The romanticist denies the sexual attraction towards woman as his polar opposite, which is the true foundation of love, and thus he becomes something which is not man, who loves something which is not woman.

The futurists seek to restore the state to its superhuman origin, through the will of the overman, and to marry and subordinate the people to the state as woman is married to man.

Now we can see that there is no contradiction when the futurists nihilistically deny all values and ideals of the past, at the same time as they worship a virile heroism. They simply talk about the feminine and masculine part of existence separately. Futuristic nihilism is a denial of the dogmas which arose when the the ancient world died, when Europe lost its connection with Being and could only worship a legacy of empty forms, bereft of the virility which impregnates Becoming with value. These dogmas are a misconception of the nature of the feminine Becoming, and when futurism declares that the world is only matter and power, they show us the true essence of Becoming in itself. And when they then worship heroism and the pure act, they give us the essence of Being in itself. Futurism as a whole becomes the union between these two principles: they proclaim the virile conquest of Woman by Man when they proclaim the heroic will acting upon the world of matter. They come to the Aryan conclusion that the material, individual life is completely without value, meaning and salvation, but that they through its heroic annihilation can both affirm the essence of life, and transcend it.

Finally we can explain the futurist nation of tomorrow. The futurists want to create a nation with heroism as its foundation, a heroism which has its source in the spiritual virility of the overman, and which extends to encompass and heighten the whole people in its own struggle. Futuristic nationalism realizes the Traditional knowledge, that the state represents the spiritual, masculine and active part of the nation, while the people and family represents the materialistic, feminine and passive part. The futurists seek to restore the state to its superhuman origin, through the will of the overman, and to marry and subordinate the people to the state as woman is married to man. (An Empire is a polygamous state, and thus it is more virile than a nation and at a lesser risk than a nation of degenerating into a mere servant of its first wife.) In order to do this, it is necessary for them to revolt against every power which the feminine Becoming has over the state, just as a true man must battle the influence of matter on his will. From this stems the futurists’ violent revolt against sentimentality, against the past and against the traditions of the people: they need to free the transcendent will from any dogmas, so it can once again be the centre of a nation. First then does the people reach their full potential, when they are the manifestation of the will of the state, just as woman must love man, and Becoming must be the manifestation of Being.

Without the pure act which futurism tries to restore, what are conservatism and nationalism but empty dogmas?

But futurism failed. What we have so far covered could be called the initial impulse and goal of futurism – but as soon as they began their actual artistic and political mission, they undoubtedly came short of it. They did not manage to find the pure, unbound act they sought, and thus they could not devour the power and beauty of modernity in the eternal, but rather were devoured by it. The reason is that they immediately turned the future into a dogma, and their movement into an ‘-ism’. Futurism became an abstract programme, a definite style that all art was supposed to adhere to. Their art lost the overhuman playfulness above all ideals that it could have had, and, even worse, they tried to include the masses in the inherently virile and esoteric nature of their art. The futuristic dogma was to control everyone and everything of society, from food and love to war and politics. Instead of a nation with the heroic act as its centre, the result was an abstract nation which would be plagued by a nearly ridiculous totalitarianism, where everything must be new and avant-garde. This was not necessary, but futurism made itself into an empty worship of modernity.

The futuristic critique shows us that no ideal of the past in itself can capture the spiritual act which is the essence of tradition, but through futurism’s failure we see that an ideal of the future is equally, and probably much more, foolish. The futurists criticized Gabriele D’Annunzio for his sentimental style, classicism and divination of female beauty – but did he not know how to carry every experience upwards, to devour every ‘degenerate’ pleasure in his own virility? Was not Fiume, the state founded from above through the artist’s will, with music as blood and war as nurture, a greater accomplishment than the failed political project of futurism? Was it not closer to the futurists’ nation of tomorrow? And they also criticized Mussolini for his mutability – sometimes he favoured the futuristic ideals, sometimes the past ideals of ancient Rome – but did he not stand closer to futuristic virility by never becoming the slave of an ideal and by incorporating everything in his will to power? Was his Italy not the futuristic dream of a people made bride to the virile state, an attempt towards an Empire of the sun, which outshone the futurists’ own poetry? The futuristic failure shows that the type of ideal seems to be secondary to the quality of the will behind it, to the spiritual race which lives through it.

Thus the greatness of futurism does not lie in its works or its legacy, but in its initial impulse, in its heroic spark, in its thirst for a destructive creativity and in its yearning for the Absolute. Who knows what would awaken, if this spark appeared again in our time, if there were men who knew how to kindle and nurture the flame it yearns to be. That would truly be the source of an art and a nation of tomorrow.