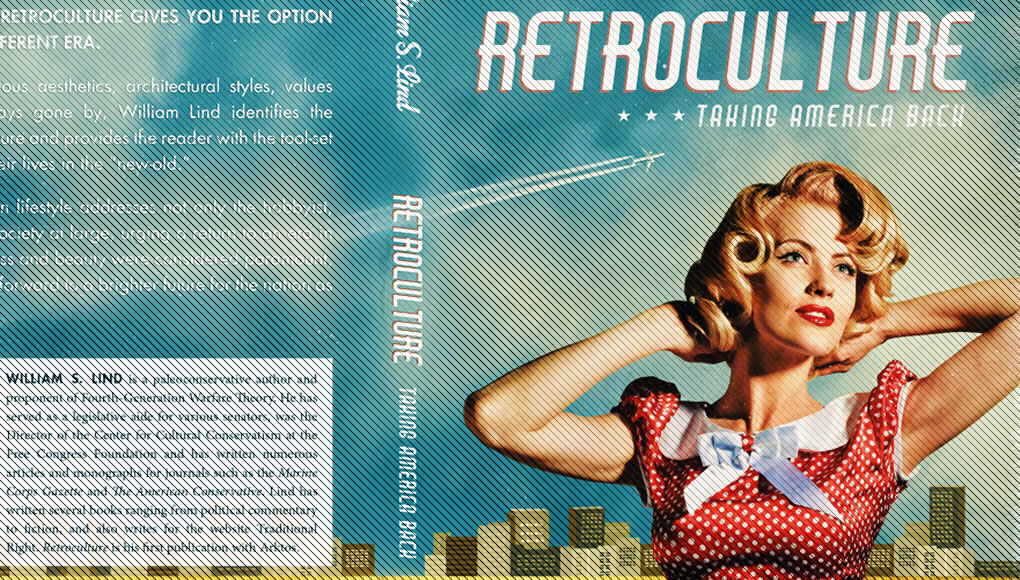 The future can be better than the past – provided we look to the past for guidance.

The following is an excerpt from the recent Arktos publication Retroculture: Taking America Back, by William S. Lind.

Retroculture is a rediscovery of the past and the good things it has to offer. More, it is a recovery of those good things, so we may enjoy them as our parents, grandparents, and great-grandparents enjoyed them. Retroculture rejects the idea that “You can’t go back.” What we have done before, we can obviously do again. For many years, Americans lived in a land that was safe, solid and comfortable, a civil and even graceful society where life for the overwhelming majority was both pleasant and good. What worked for them can work for us. We can recover the good things they had and knew.

We can regain control of our destiny. And in the process, we can reunify the generations instead of pitting one age group against another.

Conventional wisdom says we have no choice but to drive blindly onward into an undefined but increasingly threatening future. Retroculture replies, “Hold on a minute.” We do have a choice. Through a dialogue with the past, we can shape that future. We can find ways, by looking back, to make the future promising rather than threatening. We can regain control of our destiny. And in the process, we can reunify the generations instead of pitting one age group against another.

Retroculture reverses the trend this country has been following since the mid-1960s. “Old is bad, new is good” has been the watchword of the last five decades. And it has ended up in a mess. Now, Americans from every walk of life are saying “Enough!” Life yesterday was better in a great many ways than life is today. The time has come to recapture the good things Americans had and have lost. The future can be better than the past – provided we look to the past for guidance.

Americans are realizing that the time has come to free themselves from the unhealthy fascination with “self’ that has become almost an addiction since the 1960s. “Selfism,” – making the self the focus of life – goes back much further, but traditional moral values always held it in check. Traditional values told us to put service above self. They taught us that happiness comes from disciplining and mastering the rapacious demands of the self, not giving in to them. American culture expected people to focus their lives outward, to do useful things and help other people. It regarded “me first” as a sign of childishness – and of a spoiled child at that.

The flower children of the late 1960s turned these traditional values upside-down. They had the amazingly naive idea that a new “youth culture” could make the world perfect by ignoring “what other people think” and encouraging young people to do whatever felt good whenever they felt like doing it.

“Do your own thing!” became the battle cry of the hippies. Of course, your own thing mustn’t be anything your parents or grandparents might do. If possible, it had to be something they wouldn’t like at all. Hippies had to be hip, and that meant cutting themselves off from the ideas and standards of older people – except for a few older hip gurus like Timothy Leary or Alan Ginsberg. “Don’t trust anyone over thirty,” the youth culture advised. Get rid of all the garbage you’ve been taught. Drop out of the world of families, schools, and workplaces. “Get in touch with your feelings.”

But self-discovery, self-realization, and self-fulfillment didn’t make life any better. They often made it worse. Youth communes that were supposed to blaze the way to a perfect society instead fell apart because members had no sense of loyalty to the group or to each other. Widely publicized “alternate lifestyles” turned out to be fads, their followers soon growing bored and wandering off. It seemed that however much the self was given it always wanted more. A new pleasure worked a couple of times, then it was dead, and something more extreme had to follow to keep the ever-demanding self “feeling good.”

By the mid-1990s almost everybody realized that self-indulgence was not going to save the world or even make it better. But by then, the habit of “selfism” had become too strong to break. Besides, there wasn’t much else left. The youth culture of the 60s and early 70s may not have produced anything of lasting value, but it managed to trash the ideals of self-restraint and respect for the wisdom of the ages.

“Do your own thing!” became the battle cry of the hippies. Of course, your own thing mustn’t be anything your parents or grandparents might do.

So, the youth culture became “thirty-something” as the baby-boomers drifted through the mindless, feel-good glitter of the disco scene and on into the 1990s. The 90s completed the work of the 60s. With the self still in the driver’s seat, things – possessions and image – became the new road to self-fulfillment. Doing your own thing became doing whatever it took to get the trappings of wealth, power and status. In the process, modesty, honesty and fair dealing followed all the other old values onto the scrap heap.

That didn’t work either, of course. We still couldn’t keep up with the demands of the self, no matter how hard we worked to further our career, get seen in the right places, and pile up designer stuff. “Dressing for success,” “winning by intimidation,” and keeping score in terms of possessions didn’t satisfy us any more than “liberation” and “feeling good.” Paper profits melted in the following recession. Personal debt piled up. Houses and cars and boats became sources of worry rather than satisfaction.

Selfism, it seems, has run head-on into the wall of reality and gone splat. Now, in the 21st century, people are looking back to the times before the wreck. For many young Americans, it seems that the last people they remember being really content were their grandparents. The last time life was good was the 1950s, when most things were still done the old way.

A national poll, taken as early as 1992, showed how people were even then looking back fondly toward the past. 49% thought life in the past was better than it is today; only 17% thought it was worse. 47% felt that their grandparents’ lives were happier than their own; only 29% felt they were not as happy. 56% had a generally favorable impression of the Victorian period. A whopping 58% of those polled thought that our nation’s political leaders should be leading us back towards the way we used to be.

A Dialogue with the Past

Americans today communicate with a far wider variety of people than ever before, or at least so it seems. Social media, Skype and email connect us to others around the world. We travel to other countries, we go out for Thai or Vietnamese or Caribbean dinners, we see foreign films and drive foreign cars. CNN keeps us up on the very latest news from all around the world.

In discovering our own past in people and how they lived, not just in dry facts, we can take a fresh look at ourselves and our own lives.

But there is a large group of people with whom we communicate little, if at all: the Americans who lived before us. And what stories they have to tell! We have more in common with them than with almost anyone else. After all, they lived where we live, saw many of the same scenes we see, and faced many of the same problems.

True, they are no longer with us. But they left us a great many messages, in books and family letters, in the houses and towns they built, and in the furniture, clothes and music they created. In fact, they left us a large sample of the things that made up their daily lives. And they also left us their thoughts: the values and beliefs they held, ideas of how to live and the reasons to live that way, and memories of specific people – sometimes from our own families – memories that tell us why their lives were respected and even revered by those they touched.

Through the things they left behind we can talk with those who have gone before us. The dialogue can add great richness to our own lives. The immensely popular PBS television series The Civil War1 gave Americans a sense of what a dialogue with the past can offer. Seldom has a television series gripped so many people’s emotions so powerfully. Why? Because in it Americans from the past spoke directly to us.

The series had no dialogue between actors. Instead, it presented the words of the people who lived over 100 years ago in many of the same places where we live now. They spoke to us through their diaries, their letters home, their personal photographs. They spoke to us not as names in history books, but as real people struggling with real problems, and we realized that they have a great deal to say to us.

In discovering our own past in people and how they lived, not just in dry facts, we can take a fresh look at ourselves and our own lives. We can learn from their experience. We can find out how they protected themselves from life’s harsh blows through the warmth and mutual support of strong families. We can learn how they educated themselves and find that in many ways they were better educated than we are, even if they did not know how to use a computer or a smartphone. We can discover how, with much less wealth and fewer possessions than we have, they managed to build lives we often envy.

We realized in watching The Civil War that our own past, the past that earlier Americans lived, has become stranger to us than the African bush or the Amazon rain forest ever were to them. And we realized at the same time that this need not be so. The past is there, waiting for us to uncover it. We can read the words of those who are gone. And we can also learn from the many people still alive today who remember how people lived before America rejected its inheritance. The enduring pleasures of Retroculture lie in coming home to what is ours.

1 This was a highly popular mini-series on the Civil War directed by Ken Burns and broadcasted in 1990. The viewing figures were enormous, with roughly 39 million viewers tuning in to any one episode. The series has since been digitally restored and re-released on DVD in 2015. — Editor.