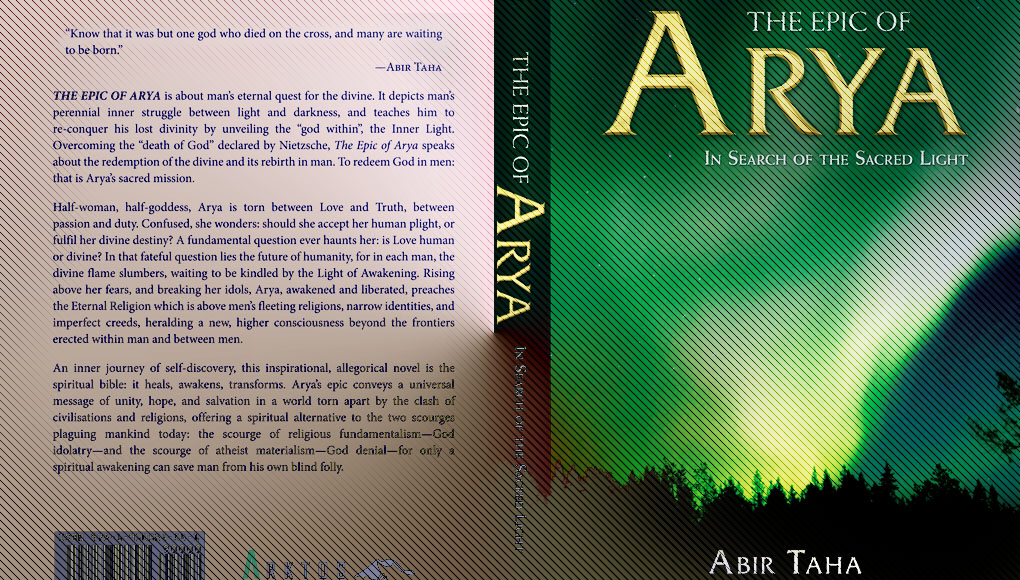 We remain limited in our elevation so long as we remain humans, instead of contemplative beings endowed with intuition — that last trace of divinity in humanity.

The following is excerpted from the Prologue of The Epic of Arya, by Arktos author Abir Taha. The Epic of Arya is about man’s eternal quest for the divine. It depicts man’s perennial inner struggle between light and darkness, and teaches him to re-conquer his lost divinity by unveiling the “god within”, the Inner Light.

When Arya, the human goddess of Light, woke up from her long dream, following an endless night in the arms of Eternity, she found herself in a strange land where darkness reigned supreme, a gloomy world she had hitherto never seen. “Am I still dreaming?” she asked her perplexed mind, overwhelmed by the boundless obscurity surrounding her, “or have I just awoken? Is not Night the time for the soul’s awakening? Does not the soul blossom in the depth of the night, and dance with the stars and gods above, even as reason rules the earth and men below during the day? Am I awake, or is my awakening itself a dream?”

Is not Night the time for the soul’s awakening? Does not the soul blossom in the depth of the night, and dance with the stars and gods above, even as reason rules the earth and men below during the day?

“My eyes, wide-open, tell me that I’m conscious, but what do my eyes know of consciousness! They belong to the earth and see only the crude things of the earth, the hollow shell and the outer form; they remain blind to the subtle essence of divine truth and higher consciousness. The spirit alone, this spark of infinity, this glimpse of eternity, is blessed with divine sight, while the body totters aimlessly in the eternal darkness of blind matter. My eyes tell me that I am awake, yet my spirit looks beyond and contends that reality lies elsewhere, that what men call ‘the world’ is but a deceptive dream, a cruel illusion of the senses, a shadow of reality.”

As Arya thus questioned Truth, wondering about Life’s manifold forms, Her hidden meaning and purpose, she again asked herself: “are we awake when our eyes are open and our reason is sovereign, or does the soul truly see when the eyes are shut and the spirit roams the ether? Does not Night unfold its deepest mysteries and reveal our inner infinity, the god within, as it unravels the secrets of the universe? But who, save a god, could answer such questions?”

“Alas! I am only a human goddess, that is, a goddess with a mission on earth. The law of Nature commands that, lest they become mere idols, all gods must go down to men, must become men, so that men can become gods. It is their divine vocation, for only by going down do they uplift life; only by living among men, and through them, do they fulfil their own divinity. Nature’s will thus has it: gods must descend to men, and men must ascend to gods; only thus is the purpose of life accomplished, for the world is a sacred circle of absolute Unity.”

“It is God’s will that gods, His messengers, angels, and warriors — the noblest manifestations of the Unmanifested, the multiple forms of the One, the highest expressions of divine Force — must first fall into the depths and the abyss of existence, before they can rise to the higher spheres and soar to the heights of Supremacy. For only thus does life fulfil its first and last commandment, which is to eternally overcome itself and create beyond itself. Only thus does God turn into life, and Life becomes divine; only thus does He embrace Life and impregnate Her with the hallowed gift of creation.”

“I am a human goddess, that is my joy and my misery. It is a joy, for all gods yearn for incarnation, it is their ultimate destiny, as perfection lies in creativity, which can only be conceived, and achieved, whenever a lofty thought assumes a noble form. It is a misery, for in vain do all humans long for divinity; in vain do they seek out eternity and dream of immortality. Perfection, to them, remains an impossible dream and an unfulfilled hope, and they die unsatisfied with a bitter taste of unquenchable thirst upon their lips.”

“I am a human goddess, and though my divine spirit floats on its own river of perpetual bliss, there in the realm of the Absolute, its form below remains bound to the shackles of earthly life’s limitations and frustrations, hampered by the fallible senses of its own humanity. That is the price for incarnation: the form allows the spirit to unfold and reveal itself, yet it binds it to the human chains of time and space. Alas! The tragedy of life is that perfection is always achieved at the price of freedom, and freedom at the price of perfection. Thus God remains unattainable save for those who earnestly seek Him and pay the ultimate price of elevation, by sacrificing their finite souls for the eternal glory of divinity.”

Having touched the heart of her existential plight — indeed, the plight of all human gods — , Arya, despondent and lost, cried out to the wind: “alas! Could it be that the gods themselves have forbidden men from fathoming the riddles of the universe, jealously keeping the sacred flame of Truth as the blessing and the privilege of the sole immortals? Prometheus thus remains the symbol of man’s endless quest to equal the gods, for death that overcomes itself is a hymn to life which leads man away from himself and closer to God.”

My unknown brothers, who strive to become immortals and dwell in the boundless abode of the gods, I entreat you to sacrifice the evanescent glories of the earth for the eternal glory of God.

“All martyrs are immortals. Immortality, however, as all greatness, comes at the highest price — for how else would it justify Life? — and that is: to sacrifice one’s humanity and shed all finite thought and earthly desire. My unknown brothers, who strive to become immortals and dwell in the boundless abode of the gods, I entreat you to sacrifice the evanescent glories of the earth for the eternal glory of God; to abandon all earthly pleasures for the divine bliss of the higher world. Forsake all lower life, fellow Warriors of Light, and you shall gain everlasting Life; offer your perishable egos on the altar of divinity, and your immortal selves shall bathe in the fountain of Eternity. All sacrifice is an offering and a blessing, for life gives back to the earth what it took from the earth; it bestows its most precious gems and its sweetest fruit to him alone who, seeking to find himself, loses all and everything; and it takes away everything from him who gains everything, but loses himself.”

“Is not Life itself a dream of the gods, a fanciful play of joy and sorrow, elation and despair, wrought on humans by the powers that be, as a blessing to the eternal and a curse on the transient? Should not man welcome death — instead of dreading it as a daily tragedy cast upon men, as the end of all existence —, should he not welcome it as liberation, as a pathway to a higher life, a threshold to a higher awakening?”

“Could it be that in our waking state, we dream Life and suckle the breasts of Her sweet illusion, and only in our sleep do we truly exist? Is sleep merely a time of rest for the body and the mind, or is it the time for the awakening of our souls to a higher reality, to Truth and Beauty? Is not death a deep and constant sleep lifting man’s indestructible Self into the realm of infinity, where only gods dwell?”

After a short moment of inner silence, pondering the meaning of the human cycle of life and death, of night and day, of slumber and awakening, Arya thus questioned her Higher Self: “Is not sleep man’s only link with the divine, the only trace left of the reign of gods on earth, before Time itself began? And yet, we become humans once more when Night passes and the world of senses again holds full sway, when magic and mystery fade, washed away by the first light of day.”

“We remain ignorant and limited in our aspiration and elevation, so long as we remain humans, that is, thinking beings who use cold logic and plain reasoning, calling their ignorance ‘enlightenment’, instead of contemplative beings endowed with intuition — that last trace of divinity in men —, who dream in the brightest daylight and awaken in the darkest night, humans who live and fulfil the dream of the gods.”

“A veil of ignorance covers humanity, a veil of silent shame that can only be lifted by man’s sincere longing for the eternal, for that longing is the last sigh of God on this earth. That is the plight of man: he remains poor in spirit though the earth is full of riches; he remains human though the gods walk among men and talk through them. Alas! The god in man remains a child waiting to mature. Shall man grow into a god, or is he doomed in his humanity?”