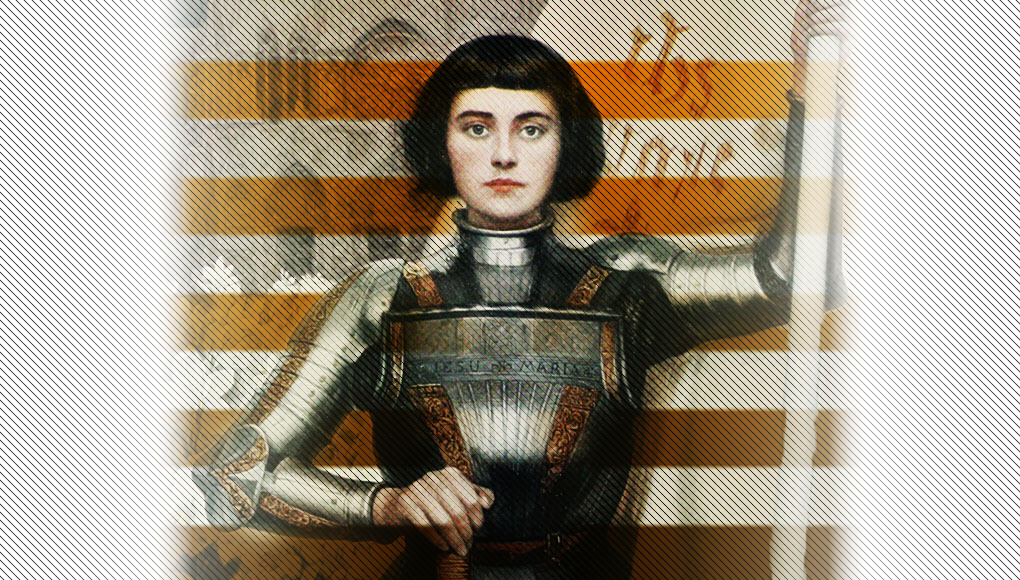 The appearance and destiny of Joan of Arc indicate a turning point in the history of European Christianity.

The following is an original translation of an article published by Julius Evola in Il Borghese on 1 March 1953. In it, Evola presents a short review of what was then a recent publication on Joan of Arc by German author Albert Mirgeler, entitled Jeanne d’Arc. Die Jungfrau und die Zukunft Europas (‘Joan of Arc: The Maid and the Future of Europe’, 1952), which does not appear to have ever been translated into English. Evola describes the book as a denso saggio, a ‘dense essay’; the same could certainly be said for Evola’s own review, in which he touches with swift surety on questions as various as the legitimizing and deligitimizing of political power, the efficacy and meaning of prophecy, the sense of ‘history’, the status of nationalism, the point of contact between divine decree and human freedom, the European question, and France’s role in all these things – not to speak of Joan of Arc herself.

The point of interest of this new, dense work on Joan of Arc is found in the fact that, in contrast to almost all other works on the same subject, it does not follow a historico-bibliographical point of view but, essentially, that of a philosophy, not to say a theology, of European history. The human, psychological and national aspects of Joan of Arc are not considered here so much as those traits thanks to which her figure acquires the value of a symbol, and for which her appearance and her destiny indicate a turning point in the history of European Christianity.

The facts preannounced through prophecy or oracle have no standing save as the garments and indices of something indivisible; they are in and of themselves secondary elements, whose true and deep sense reveals itself only afterwards.

The message of Joan of Arc possessed a revolutionary character in her time, by reason of the fact that it affirmed the idea of a chrism which a nation and the head of a nation can receive directly from God, and no longer exclusively through the representatives of the Church or other mediators of the sacred. A new possibility emerged therewith, one which was unknown in the late Medieval Period. Joan of Arc’s mission was to announce to the King of the French a kind of ‘election’ or of divine mandate. The title she gave to this mandate was ‘lieutenant de Dieu’ – and this in a context where, since the Guelph revolution of the eleventh and twelfth centuries, the dignity of being a representative of Christ had exclusively been vindicated by the head of the Church alone.

Joan prophesied the advent of a Saint Royaume de France1 – and in preparation for this, the battle with the English and history; for a moment it seems as if history became transparent in its higher meaning, as if history were conforming itself to an eternal, divine decision, announced by the ‘voices’ that spoke to Joan of Arc and by which she legitimized her mission and, subsequently, her martyrdom itself.

In this respect, Mirgeler clearly brings to light the sense that every true prophecy has always borne, and every true oracle. It is not a question of mere knowledge of the future. The facts preannounced through prophecy or oracle have no standing save as the garments and indices of something indivisible;2 they are in and of themselves secondary elements, whose true and deep sense reveals itself only afterwards.

True prophecy reveals what is the essential thing, in the light of a superior dimension, in earthly events, and prefigures this even as a sketch anticipates a work of art.

Thus prophecy indicates essentially a direction. In such cases, a choice is presented to that man who bears the responsibility of giving a form to history; he must say yea or nay to the prefigured direction, which represents that single path by which history may make visible anything transcendent or atemporal. The election or the condemnation of peoples depends on this decision: the degree to which they and their leaders possess the capacity to comply with the transcendence of a given destiny. When the experience produces a negative outcome, when the attempt fails, the two series disassociate from one another: the higher order becomes mere ‘history’, subject to those contingent factors by which ‘history’ is determined.

According to Mirgeler, France was given such a possibility at the appearance of Joan of Arc – the possibility, not only of lifting itself up once again in the moment of its extreme danger, but also of attaining to the dignity of a ‘Saint Royaume’. But all of this reduced to naught but a fleeting flash: the possibility that was offered to France, and that could have also possessed a universal significance for the whole of Christian Europe, was lost. The message of the Maid of Orléans was in vain.

Mirgeler rightly observes that, after the defection of Charles VII,3 France had to follow the decision taken toward the ‘absolute state’, which constitutes, as the rule of Philip the Fair4 had already heralded, the precise antithesis of the ‘Saint Royaume’. This is the root for the falsification entailed in the nationalistic and chauvenistic exploitation of the figure of Joan of Arc. There is indeed a radical antithesis between the state of affairs in which raison d’etat and national pride form the ultimate authority, to such a point that they divinize themselves (this being the direction which issues in modern ‘totalitarianism’), and the other state of affairs, in which a people and a leader effectively follow a ‘divine’ mandate, which implies a kind of catharsis and ascesis, a liberating of oneself from everything which is particularistic and also from every brute will to power.5

Mirgeler says that France therefore ever more came to follow the path of a blind ‘gloire’, a glory deprived of light: and for this reason, triumph never availed any Frenchman – not a Louis XIV nor a Napoleon, nor a Clemenceau;6 nor did it ever result in a positive contribution for a solider European order.

France therefore ever more came to follow the path of a blind ‘gloire’, a glory deprived of light: and for this reason, triumph never availed any Frenchman.

The true France – he says – is revealed when things reach their extreme. In such moments will sometimes appear the saviour, ‘the father of victory’:7 but he is no longer a Joan of Arc, he is not even the representative of the healthiest strata of France, which is to say those strata which are existentially Christian despite all corruption and all ‘free thought’. Then there are on the other hand figures who entirely pertain to the ‘beyond’, whose appearance or disappearance, as well as any fleeting energy they might arouse, remain void of any deeper meaning. But nothing better than this could be hoped from mass nationalism, whose prototype is offered to Europe precisely by France herself.

1French, ‘Holy Kingdom of France’. (All footnotes are the translator’s.)

2In the translator’s opinion, Evola’s original draft most likely had invisibile (‘invisible’) in the place of indivisibile (‘indivisible’), as the latter does not appear to make a great deal of immediate sense in the context.

3Charles VII of France (1403–1461) was king from 1422 till his death, and hence was the reigning monarch during the rise and fall of Joan of Arc, whose military triumphs greatly consolidated his power.

4Philip the Fair, or Philip IV of France (1268–1314), was noteworthy in the history of France for the power he granted to legalists and bureaucrats toward the centralization of his power, and for his dissolution of the Knights Templar (and the subsequent arrest and torture of hundreds of the Templars) on the pretext of a complaint brought against them, but in reality quite probably a maneuver to avoid the enormous debt he had accrued with them. He is sometimes regarded as a ‘man ahead of his time’ or a very ‘modern’ ruler; we concur with the latter observation, though surely not with the evaluation it implies.

5N.B. that the Italian here is libidine di potenza, and not volontà di potenza, which would be the common translation of Nietzsche’s celebrated (or infamous) idea of der Wille zur Macht. Libidine di potenza could also be translated as ‘thirst for power’ or ‘hunger for power’; it stems from the same Latin original which gives us our English ‘libido’.

6Louis XIV (1638–1715), the Sun King, was the outwardly resplendent ruler (for a bewildering seventy-two years) of an inwardly frivolous regime which was already well on the path to the tremendous collapse represented by the French Revolution. George Clemenceau (1841–1929) was Prime Minister of France during World War I, and thus oversaw both the defeat and the subsequent shaming of Germany (he was, for instance, one of the major architects of the scurrilous Treaty of Versailles). The degree to which Napoleon Bonaparte’s (1789—1821) in some ways grand attempt to unify Europe proved finally vain and impossible needs not be evaluated here, so well known are the historical facts surrounding the affair.

7Quite possibly a deliberate reference to Clemenceau (see previous note), who was known colloquially as ‘Father Victory’.