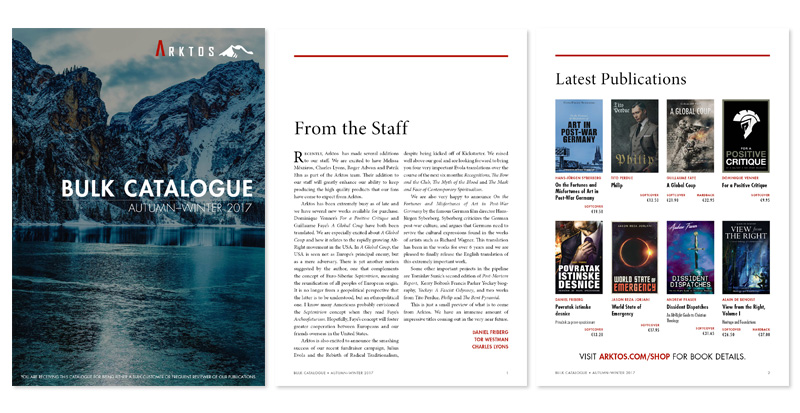 Recently, Arktos has made several additions to our staff. We are excited to have Melissa Mészáros, Charles Lyons, Roger Adwan and Patrik Ehn as part of the Arktos team. Their addition to our staff will greatly enhance our ability to keep producing the high quality products that our fans have come to expect from Arktos.

Arktos has been extremely busy as of late and we have several new works available for purchase. Dominique Venner’s For a Positive Critique and Guillaume Faye’s A Global Coup have both been translated. We are especially excited about A Global Coup and how it relates to the rapidly growing Alt-Right movement in the USA. In A Global Coup, the USA is seen not as Europe’s principal enemy, but as a mere adversary. There is yet another notion suggested by the author, one that complements the concept of Euro-Siberia: Septentrion, meaning the reunification of all peoples of European origin. It is no longer from a geopolitical perspective that the latter is to be understood, but an ethnopolitical one. I know many Americans probably envisioned the Septentrion concept when they read Faye’s Archeofuturism. Hopefully, Faye’s concept will foster greater cooperation between Europeans and our friends overseas in the United States.

Arktos is also excited to announce the smashing success of our recent fundraiser campaign, Julius Evola and the Rebirth of Radical Traditionalism, despite being kicked off of Kickstarter. We raised well above our goal and are looking forward to bring you four very important Evola translations over the course of the next six months: Recognitions, The Bow and the Club, The Myth of the Blood and The Mask and Face of Contemporary Spiritualism.

We are also very happy to announce On the Fortunes and Misfortunes of Art in Post-War Germany by the famous German film director Hans-Jürgen Syberberg. Syberberg criticizes the German post-war culture, and argues that Germans need to revive the cultural expressions found in the works of artists such as Richard Wagner. This translation has been in the works for over 6 years and we are pleased to finally release the English translation of this extremely important work.

Some other important projects in the pipeline are Tomislav Sunic’s second edition of Postmortem Report, Kerry Bolton’s Francis Parker Yockey biography, Yockey: A Fascist Odysssey, and two works from Tito Perdue, Philip and The Bent Pyramid.

This is just a small preview of what is to come from Arktos. We have an immense amount of impressive titles coming out in the very near future.